For the Love of Necropants

Everyone has fears. Mine is falling off of things. Not like rolling over and falling out of bed. No, I am petrified of falling off a cliff and plummeting to my death. Which is funny in a way because I used to regularly go sky diving; I’m not afraid of death by defective parachute, etc.

Anyway, Day 2 in Iceland involved Mr. Pretty and I hopping in the car at our cottage in Hvammstangi and heading out to Hólmavík (route 72 to route 1 to route 68) for a visit to the Icelandic Witchcraft and Sorcery Museum. Why? Because they have a replica of necropants, people! What kind of writer of horror would I be if I didn’t insist on getting up close and personal with the necropants? The Icelandic Road Conditions map said it was a perfectly non-icy drive, and it was a gorgeous day. A fine day for necropants.

Except it wasn’t. We got about halfway there and had to turn back—the roads were a little icy, which is normally not a big deal except these were Roads!of!Death!

Picture it: narrow gravel or dirt roads, frost covered, pockmarked with potholes. On one side, lava fields. On the other side, a sheer cliff that drops straight down into the fjord. All that’s separating you, the traveler, from certain death? Uh, an occasional yellow marker to remind you to stay the hell on the road, dumbass.

Did I mention the huge number of these road signs? 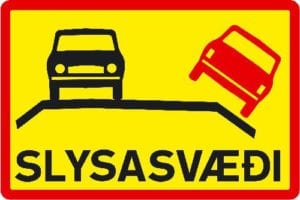 You know. In case you weren’t freaked out and contemplating your own mortality enough, I guess.

There are not enough necropants in the world…even if the roads had been in perfect condition. I don’t mind saying that Icelanders are made of heartier stuff than me. I wasn’t even the one driving, and I was a white knuckling, sweaty-palmed mess.