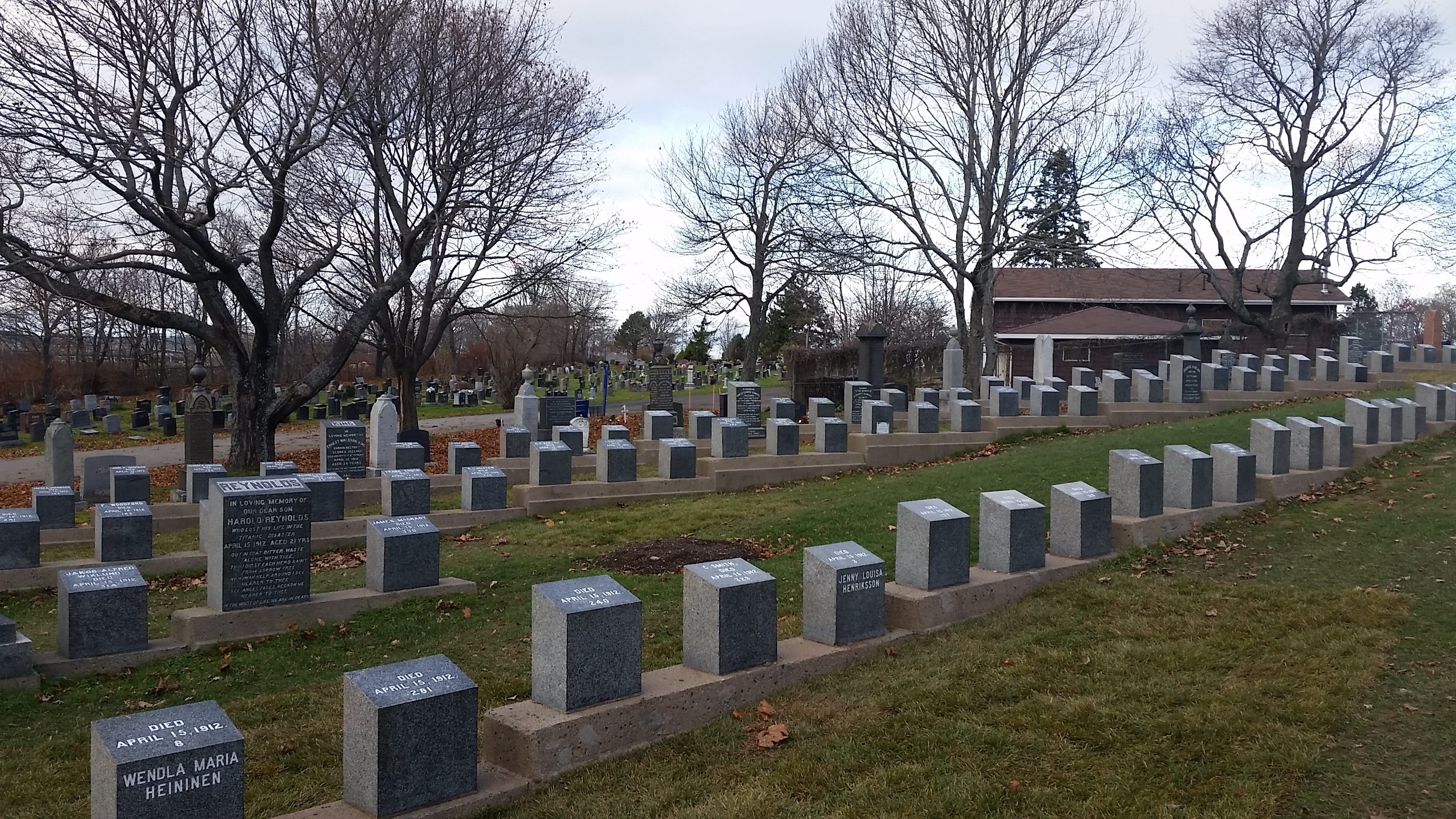 The BBC is reporting today that the wreck of the Titanic has maybe 14 more years before it disappears forever because of metal-eating bacteria that are going to town on the remains of the ship. Because of being subjected to the film Titanic more times than I care to count, I can now only imagine the sea floor strewn with spare pieces of railings and an old broken mirror and, of course, the pristine Heart of the Ocean necklace.

In a lot of ways, that makes me sad. I mean, I don’t want Leo DiCaprio and Kate Winslet in my head instead of the people who actually died or survived the sinking. That’s just unseemly. So I conducted a little experiment on a recent trip to Halifax, Nova Scotia, where the bodies of those who perished were taken, and where many are now interred in three different cemeteries.1 Could I finally stop humming My Heart Will Go On every single time a news story about the RMS Titanic appeared? 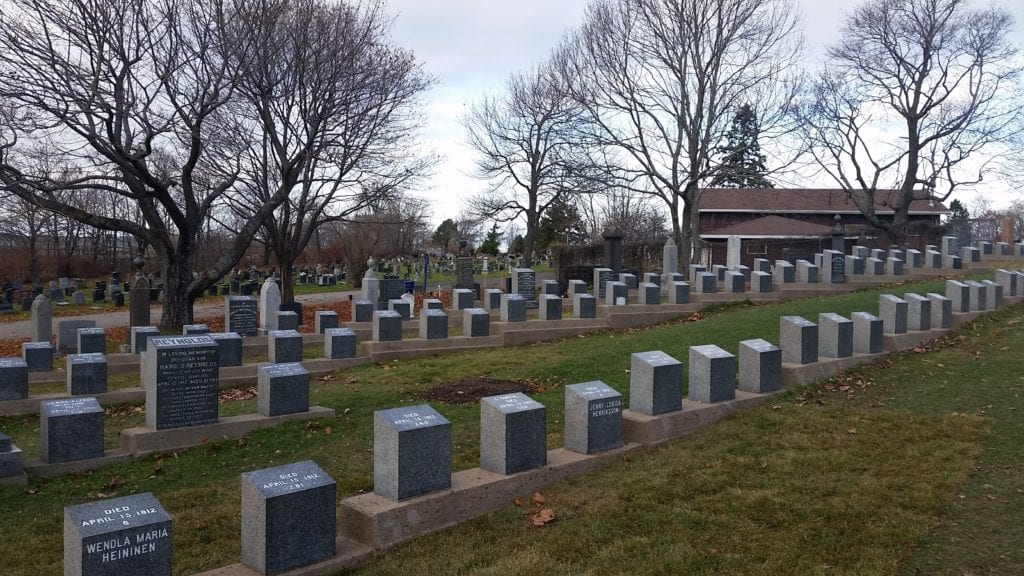 You can’t get away from the film entirely, though. Behold, the grave of a J. Dawson: 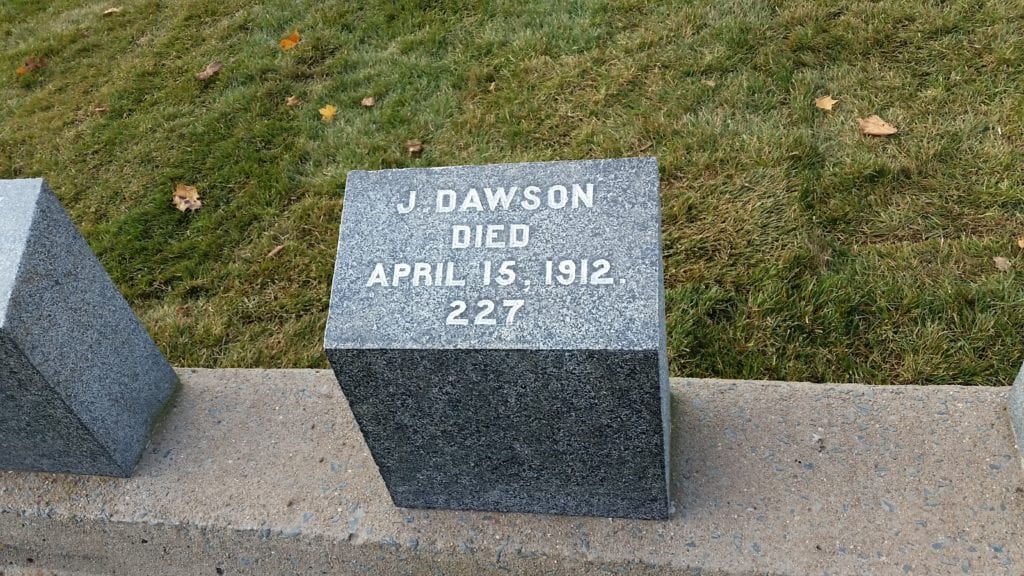 Allegedly, film producers had no idea that an actual J. Dawson had been on the ship, but it doesn’t stop people from visiting this stone–the grass had recently been replaced because so many people come by. The real J. Dawson was a Joseph. He was 23, Irish, and he shoveled coal in the engine room of the Titanic. That did nothing to pry the Celine Dion tune wafting through my brain. 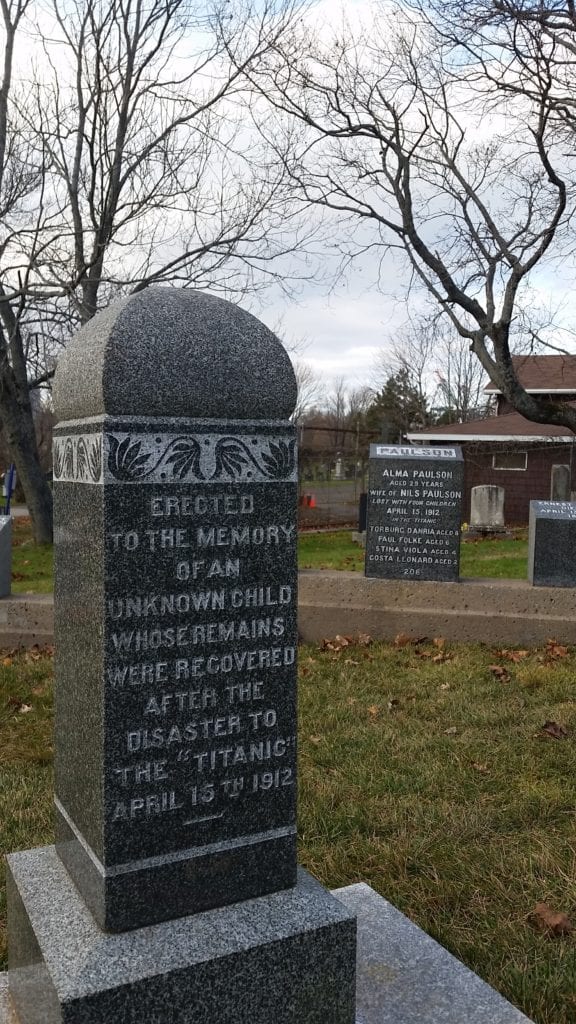 What did help is this gravestone. A roughly two-year-old boy, a blonde, was recovered and buried at Lawnview, memorialized with an “unknown child” marker. No one knew who he was and never definitively identified him. Until 2011 anyway.

Researchers exhumed the boy’s coffin in 2001 and found only a 2.4-inch-long (6 centimeter) fragment of an arm bone and three teeth left from the unknown child, but thanks to the wonders of science, that was enough to extract DNA. The leather shoes found with the body (now on display at the Maritime Museum of the Atlantic, which I also visited) also helped, and the body was identified as that of Sidney Goodwin in 2011.

And yes, the marker was changed to reflect Goodwin’s identity. Interestingly, the grave behind Goodwin’s is that of Alma Paulson; at one point the unknown child was temporarily misidentified as one of her children that also died when the Titanic sank.

So did the experiment work? The answer is kind of. I’m definitely more apt to think of the unknown child grave marker, the tiny shoes on display at the Maritime Museum, and Sidney Goodwin in response to the word “Titanic,” but Jack and Rose are still in my head, too. Baby steps, I guess.

1. Let me be clear: I’m not above a bit of macabre tourism, but I didn’t go to Halifax specifically for the Titanic. It was just an added bonus.↩