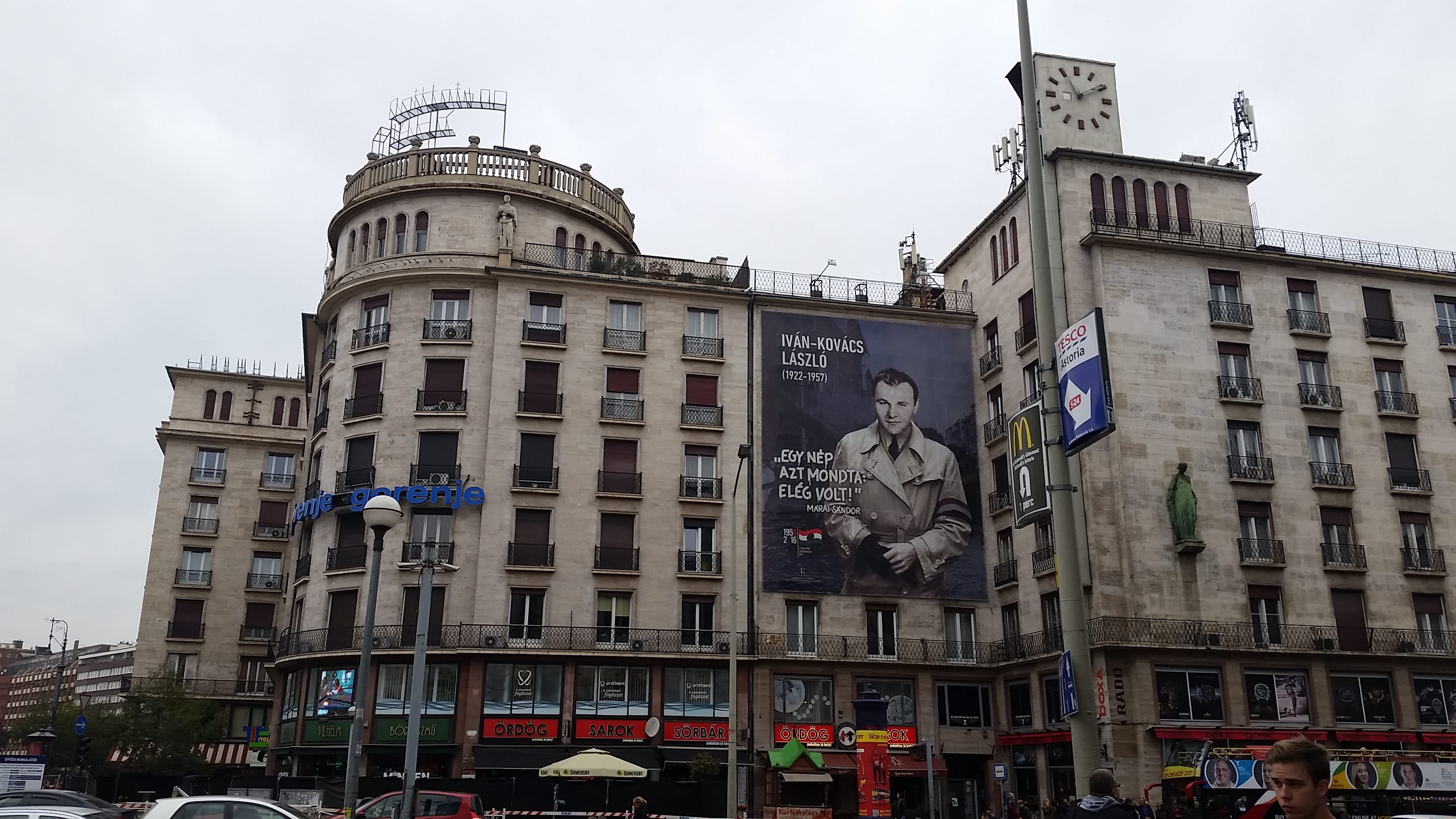 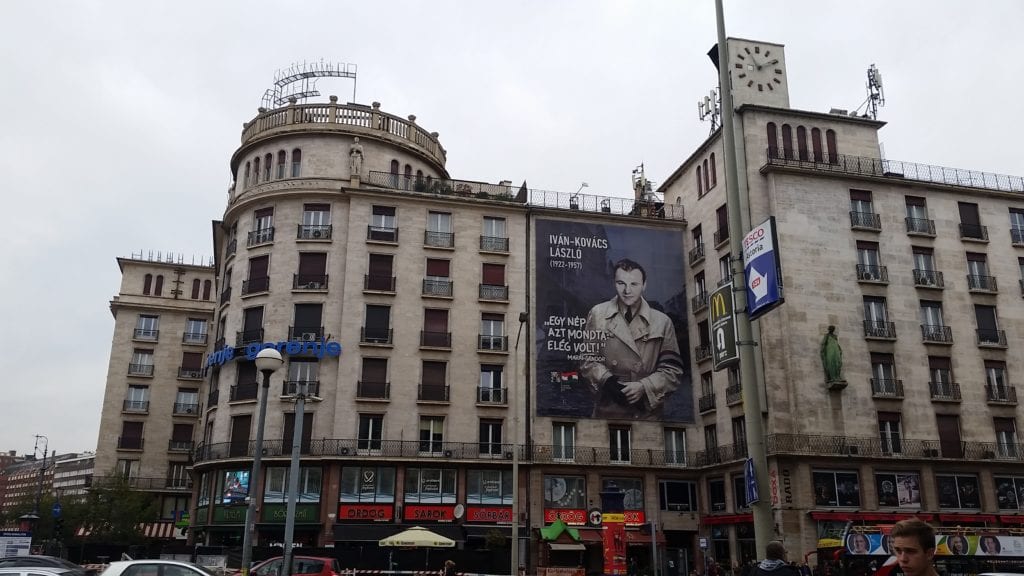 Just before Mr. Pretty and I left for Budapest, the U.S. State Department issued a travel warning. Visitors should avoid the Hungarian Parliament building on October 23. There would be marches, they said. Rallies against the government. Potentially violent protests to commemorate the short-lived Hungarian Uprising of 1956. Last year was the sixtieth anniversary. It was a big deal, and many Hungarians are not overly fond of their current prime minister, Viktor Orbán, who seems to be dragging the country ever-closer to authoritarian rule.

I’m not afraid of protests; I’ve engaged in more than a few myself over the last few months here in the States. That said, it’s a little different when you’re somewhere in which there’s a language barrier, and there’s a chance of getting swept up in a torches and pitchforks crowd. That’s why Mr. Pretty was a tad nervous when I said I wanted to attend an event to commemorate the 1956 uprising that involved literal torches. 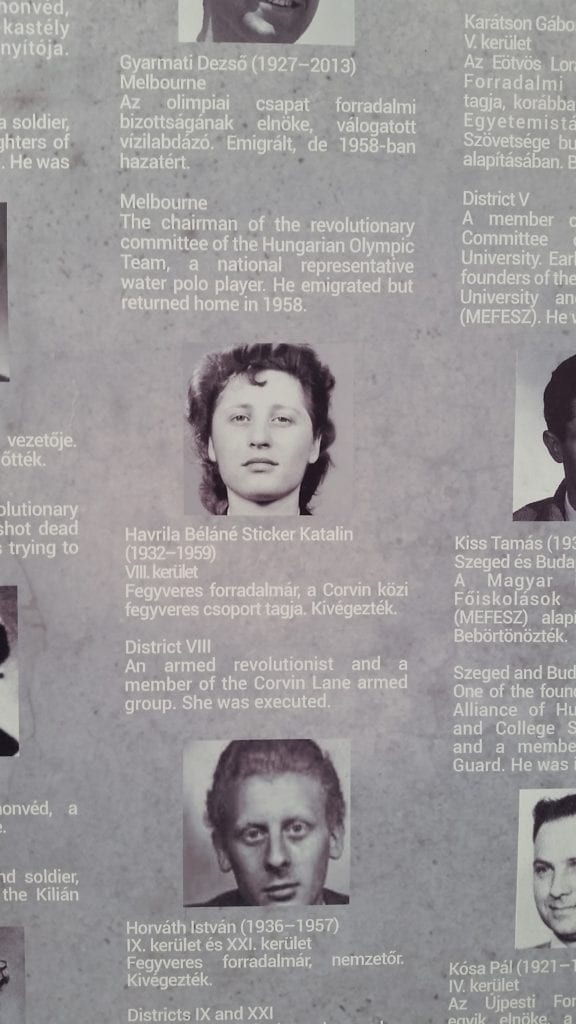 Hungarian students played a very important role in the uprising–the revolution was, in part, launched by students and a few professors from Budapest University of Technology and Economics. To commemorate the uprising, a torchlight procession was planned to start at the university and march down the Danube riverfront to Nagy Imre Square for a lighting of the Flame of Revolution and then on to Bem József Square. I wanted to be there. It was clear that life under Soviet rule (and the possibility of returning to that kind of government) is still very relevant and on the minds of many Hungarians. It was obvious in the thoughtful and pointed way in which the leaders of uprising were remembered at an exhibit outside the House of Terror, a museum that memorializes those detained, interrogated, tortured, or killed during fascist and communist regimes in Hungary. It was obvious in the huge line of people waiting to get into the House of Terror on October 23.

We smelled the fire before we saw even a single torch. Then came the rumble of a vehicle. The sound of voices and boots on paved roads. In the distance came flickers of fire. We hadn’t missed it after all. And the reason why no one was waiting to see the procession is because half of Budapest was marching in the procession. 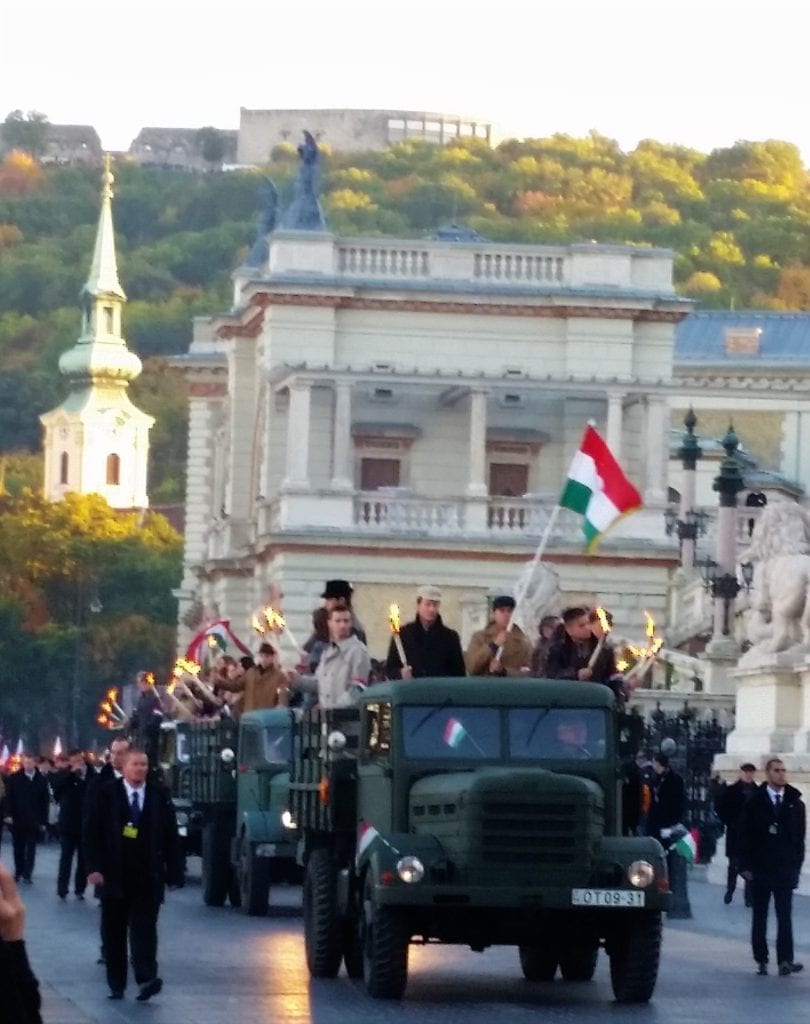 People just kept coming. Old people. Young people. Babies in carriages. Almost all with torches. Many waving the Hungary flag. It seemed to go on forever. It was affecting. The uprising remembrance is meant to be a somber holiday. The uprising was crushed after only two weeks when the Soviet Union sent in tanks. 2,500 Hungarians died–including leaders of the resistance who were executed for their parts. 200,000 Hungarians fled as refugees. And everything I saw that day really was very serious and moving. But there was also a lot of very obvious national pride. A country is not necessarily its government. A country’s people are not necessarily representative of their government. And when a government doesn’t represent the spirit of its people, the people make it known. It’s  interesting–if not frustrating–to see the parallels to the U.S., now, in retrospect.

Since our visit in October 2016, Hungarian’s prime minister has begun construction a new border fence, is jailing any asylum seeker and forcing them to pay for their own detention, and he has called for “ethnic homogeneity” in Hungary as a means of keeping the peace. He continues to ally himself closely with Russia. At the same time, however, there’s a new opposition party gaining power–and it’s expected to gain seats in parliament next year to serve as a foil against Orban. More parallels, eh?