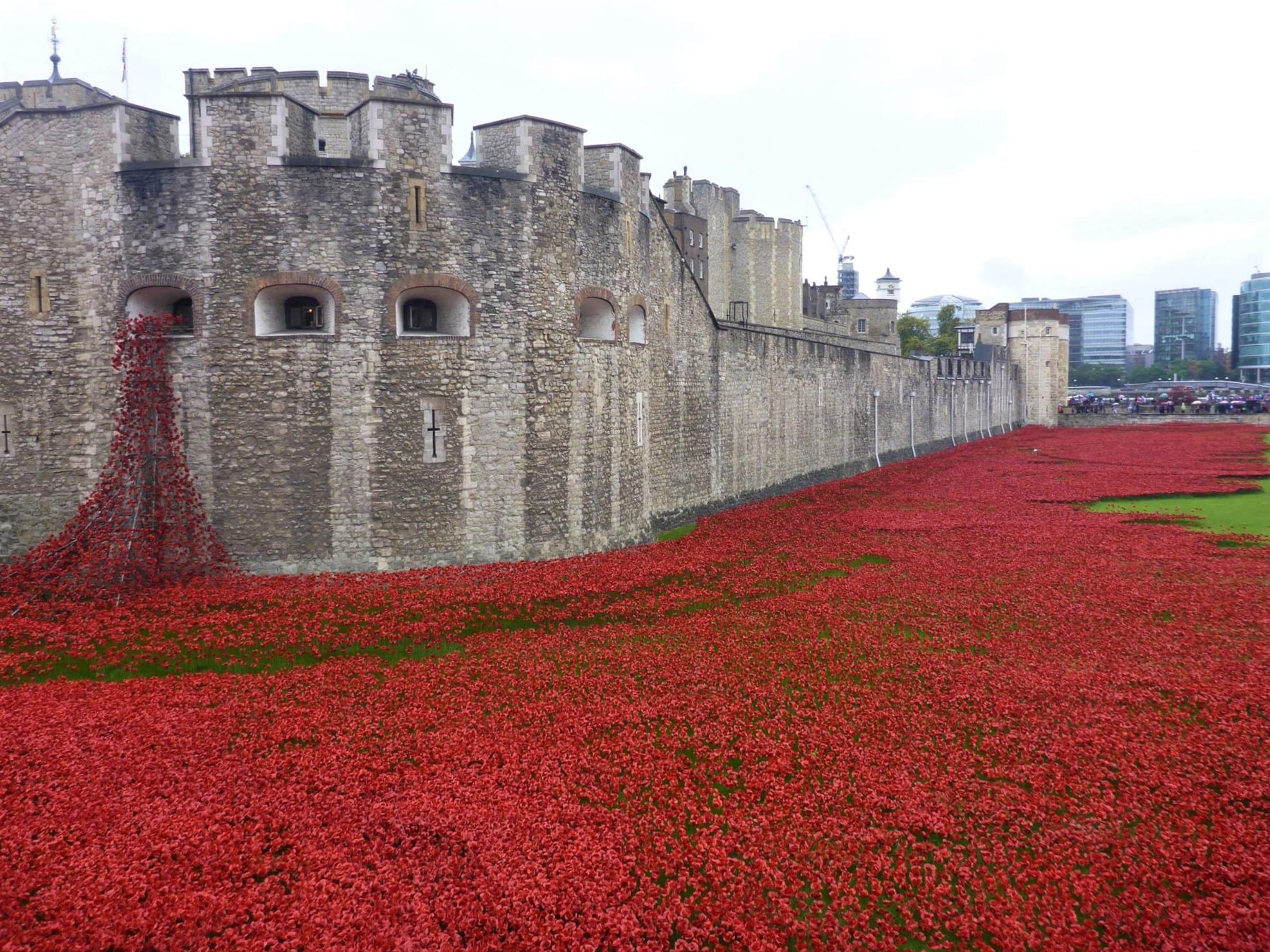 Every person who nonrevs1 has one of those stories–when you take a ridiculous trip, just because you can. For me, I desperately wanted to see the Blood Swept Lands and Seas of Red exhibit at the Tower of London. In the second half of 2014, two artists filled the Tower’s moat with red ceramic poppies to mark one hundred years since the first full day of Great Britain’s involvement in the First World War. I didn’t have a lot of vacation time, and I was a little short on cash. But oh my crap, I wanted to see the exhibit!

So I made a plan: fly out of Philadelphia on Friday night, land in London on Saturday morning, and go directly to the Tower of London to see the exhibit. And because I was looking to avoid paying the hefty departure taxes levied when flying out of the UK and premium hotel costs in London, I would take the train to Brussels, stay overnight there (on Saturday), and fly back to the States on Sunday afternoon. Go back to work on Monday morning, like I hadn’t just flown 7,000 miles in a single weekend.

Total cost: $177 ($40 for the round-trip flight, $97 for the hotel, and 39 euros for the train/about $40 USD). Absolutely doable, as long as my flights weren’t late or cancelled, and I didn’t dawdle anywhere. Of course, I worried I might not survive the jet-lag. And just to throw an exciting wrinkle into the whole thing, I was wearing a walking boot because I had achilles tendonitis. 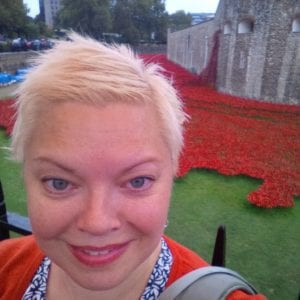 So. Getting on the flight to London was easy–there were 50 empty seats in coach. I nabbed a row to myself, but sleep was impossible–I was too excited, and trying to sleep in a walking boot is impossible anyway. Getting through passport control was a blur, but I do remember stopping in the airport bathroom to brush my teeth and throw my contact lenses in. Clearly, from the picture, you can see I didn’t bother to fix my hair. I looked . . . crazy. I felt a little crazy.

I took the train from London Heathrow into London proper, although I barely remember it. What I do recollect perfectly is that it was raining, which made for some hairy walking in the walking boot: the area around the Tower is full of cobblestone streets and sidewalks, which get very very slippery when wet.

The main thing is that I did make it to the Tower of London. The last time I’d been there was in 2001, only a few weeks after the attacks in New York City and at the Pentagon. No one was traveling at that time–people were still so freaked out. Tourist attractions were completely empty, including the Tower. Mr. Pretty and I had the Tower of London almost entirely to ourselves. In 2014, when I was there for the poppy exhibit, it was packed. There was a lot of interest in the poppies, but the Tower itself was mobbed. 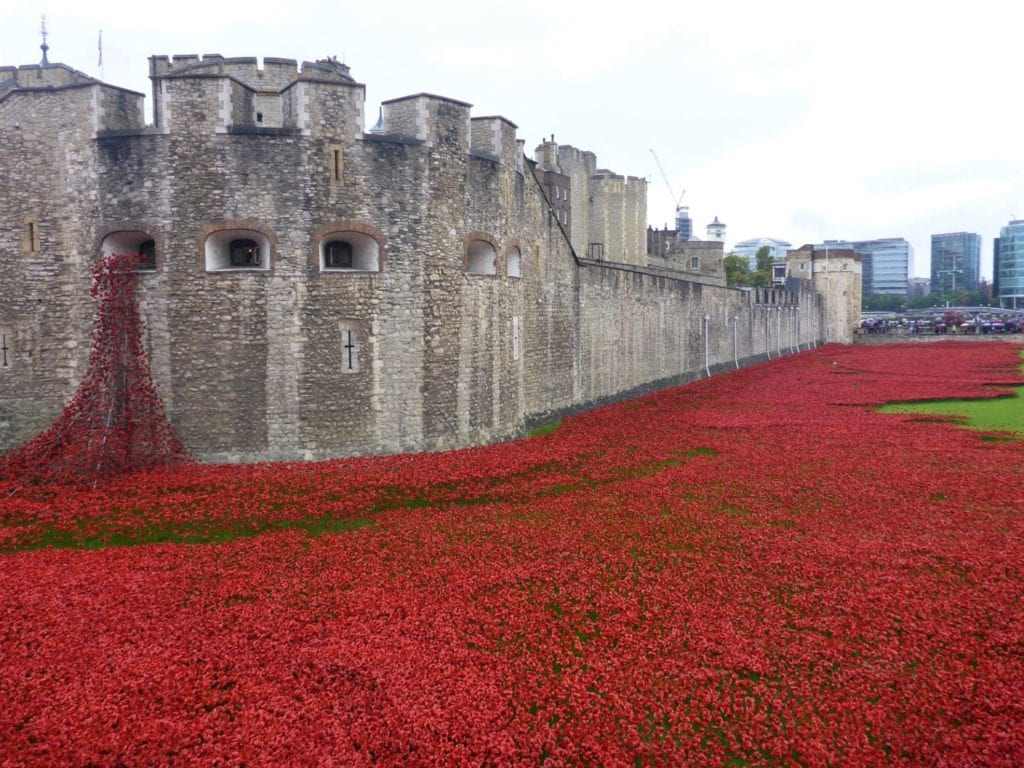 I don’t know why, but it was surprising. Even though I knew–intellectually–the Tower was a popular stop for tourists, because of how dead it had been during my last visit, I never expected to see so many people. This time, there was just enough time to walk around one of the buildings on-site, and then I had to go. My train to Brussels awaited me at St. Pancras station.

Here’s where I get stupid. No, don’t worry–I made my train and arrived in Brussels without incident. I even made it to my hotel, although I had no idea why the cab driver looked at me so strangely when I paid him. I found later, though, when I tried to pay for macarons at Pierre Marcolini with pound notes. Did you catch that? Pound notes. I was in Brussels. Where they use euros.

The rest of my trip was fairly uneventful (barring the occasion of my first pre-menopausal hot flash), and I arrived back in Philadelphia weirdly energized. I’d done it. It was possible. I’d taken a weekend trip to Europe and lived to the tell the tale.

Since then I’ve been able to do a few short-runs via Mr. Pretty’s nonrev benefits, and it’s been awesome–but you always remember the first trip.

1. Nonrev=nonrevenue passenger. Typically an airline employee and his/her/their designated companion(s). If there are unsold seats on an airplane, those seats become available to the nonrev list. For Mr. Pretty’s airline, it’s free to fly domestically, and you pay airport taxes for international flights. It’s a nice perk, although it can be fraught with anxiety since there’s no guarantee of getting on a plane.↩