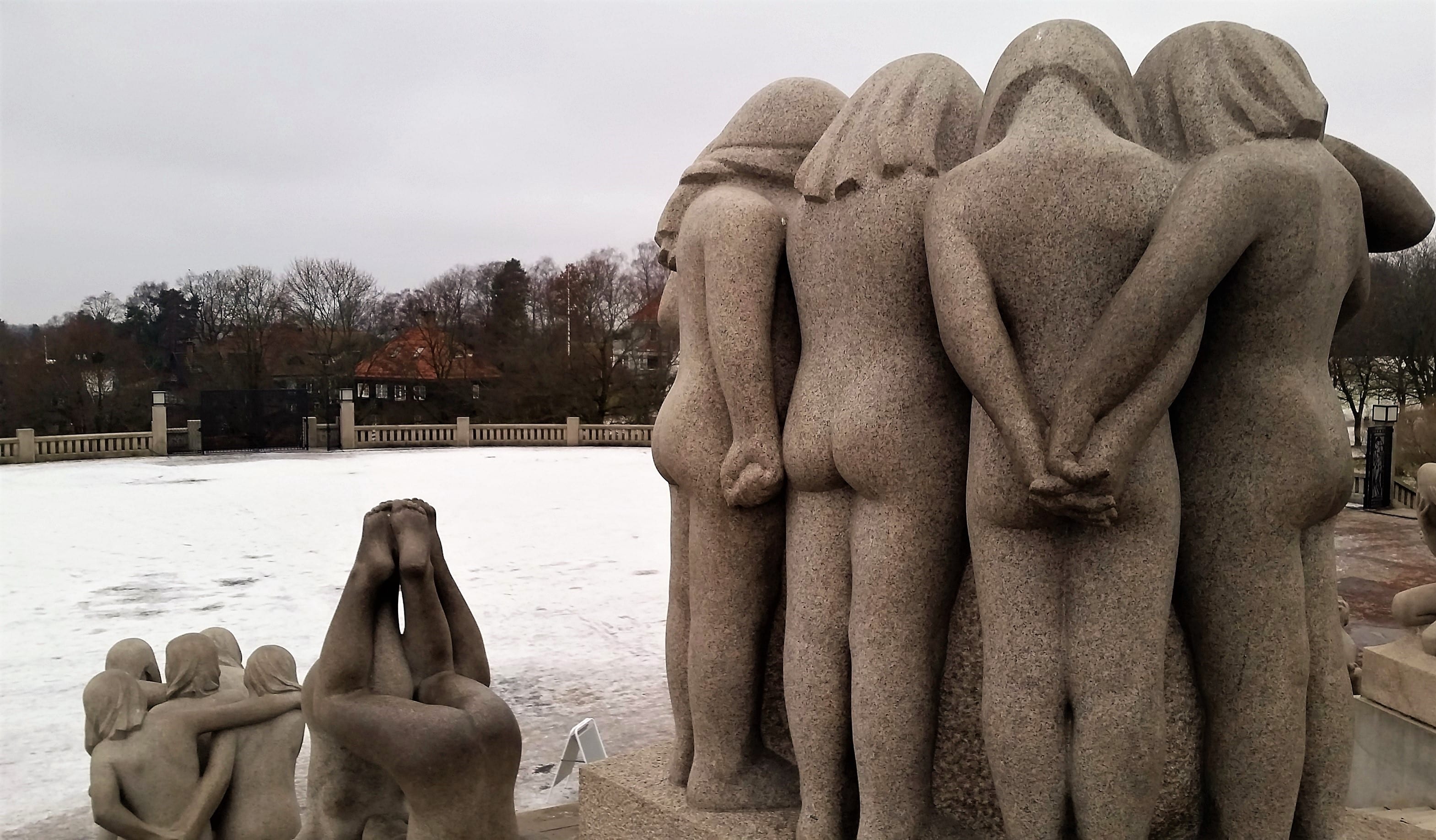 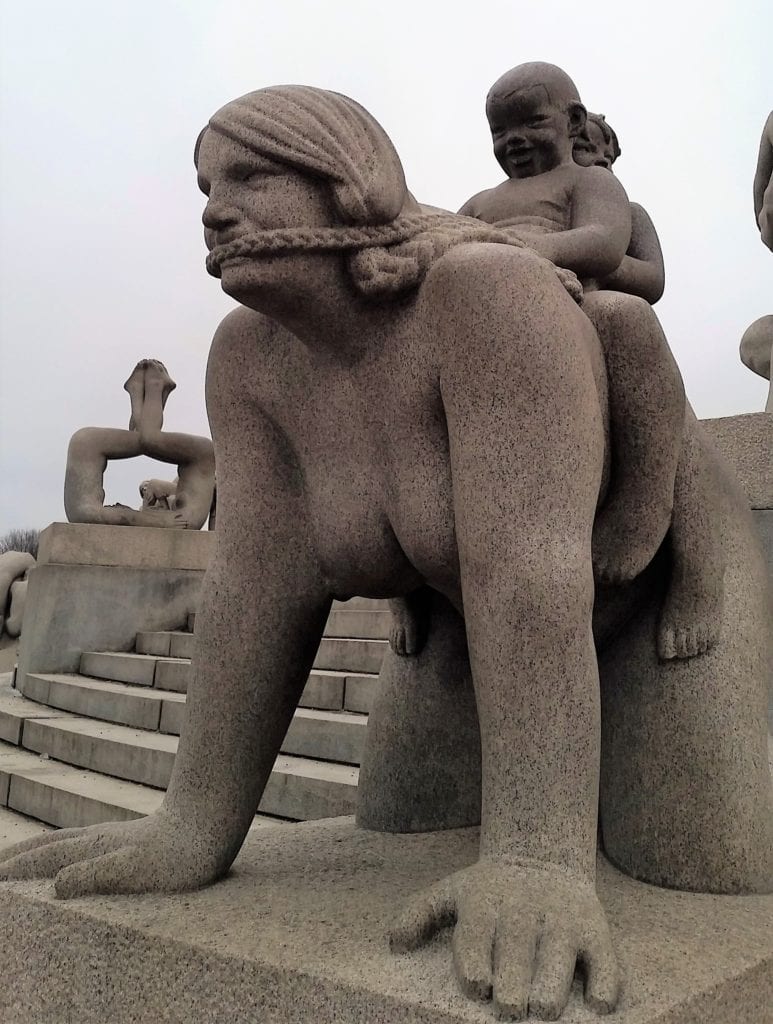 “What is this place?” Mr. Pretty’s face was priceless–he was torn between amusement and concern for my sanity. Somehow, he was not comforted when I replied, “It’s Vigeland Park!”

Norwegians are not a prudish people, for sure. To an American, a park full of naked sculptures . . . well, I remember making fun of former Attorney General John Ashcroft (during the George W. Bush administration) for insisting on covering up two partially nude statues in the Great Hall of the Department of Justice because his delicate sensibilities were offended. But Vigeland Park is more than a park full of nude statues–they’re some truly bizarre nude statues. In addition to the strange image to the right (a baby and a toddler riding bareback on a naked lady with a hair bridle), there’s the insanely hilarious naked man being attacked by demon-y nude babies.

Over two hundred sculptures–212, to be exact–on 80 acres, all by Norwegian artist Gustav Vigeland and all donated to the City of Oslo. Why? They struck a deal–Vigeland was given a massive studio and apartment near Frogner Park (in which Vigeland Park is located), and Vigeland agreed to give all the work he’d previously created, plus everything he would produce until he died. Vigeland was also in charge of the design and architectural layout of the park (finished in 1939), and it’s truly lovely.

And slippery, I might add. Mr. Pretty and I were there in early January. It was cold and icy, and Norwegians are big on personal responsibility–and it’s your responsibility not to fall ass over teakettle since they don’t appear to believe in any kind of ice melt. Considering the kinetic energy of the sculptures, it seemed kind of appropriate. Hey, if you’re going to flail your way up a flight of stairs to the Monolith Plateau, you’ll at least match some of the statuary.

Speaking of the Monolith, it’s gorgeous, and you should see it. Work began on the piece in 1924, and it took three stone carvers something like 14 years to finish. Sadly, Vigeland died in 1943, a year before the Monolith was unveiled. In all, Vigeland Park is the world’s largest sculpture park by a single artist.

As you might imagine, you won’t be the only person cavorting in the park: it receives over one million visitors each year. It’s a favorite picnicking spot for Oslo residents, which strikes me as hilarious for some reason that I’m sure is related to my standard-issue American nudity hang-ups. In January, though, early in the day, on a day when snow was in the forecast, you might very well have the park almost to yourself. Mr. Pretty and I were nearly alone at first, free to act silly among to the sculptures. By the time we left, a few more people had arrived, but it was still far from crowded.

By the way, Vigeland is also the guy who designed the Nobel Peace Prize medal, and by sheer coincidence, Mr. Pretty and I ran into a statue of Icelandic historian and poet Snorri Sturlson when we were in Reykholt, Iceland recently. And no, in case you’re wondering, the statue of Sturlson is not a nude work.

Interestingly (to me, anyway), Vigeland was inspired by Auguste Rodin, and the connection between Vigeland’s sculptures and, say, The Thinker is quite obvious. Philadelphia, my home base, has a Rodin museum with a cast of the 1902-1904 version of The Thinker. I pass by it quite often, so now I can’t help but remember running around Vigeland Park when I do.

Vigeland Park is a bit outside the tourist zone in Oslo, which doesn’t mean it’s difficult to get to. You can catch Oslo’s metro to Majorstuen, which puts you a 10-minute walk away, but the tram is better option: the #12 stops at the gates of Vigeland Park. Consider starting your day at Vigeland Park, then catching a bus to Bygdøy since you’ll be in roughly the same area. Bygdøy offers half a dozen great museums, so you’ll get a little crash course in Norwegian culture. 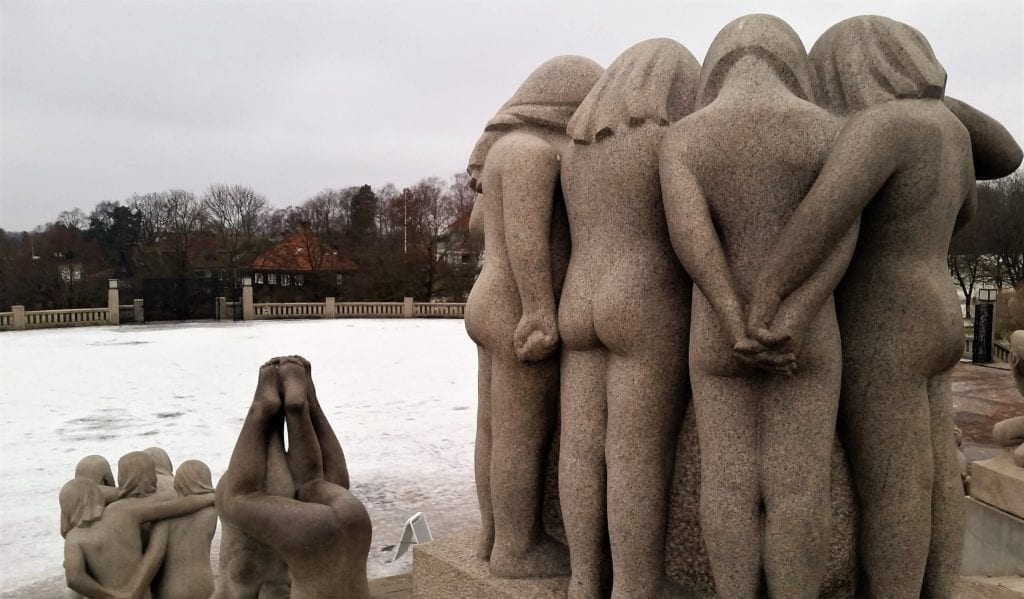