“What do you want for dinner?” my friend asked. We were sitting in her parents’ house in suburban Toronto. It was still Day 1 of my Toronto trip.

“Something light,” I said. “Oysters maybe.” After all, we’d had a lot of sushi for lunch, plus cookies from my friend’s favorite cookie place. My stomach was full.

Somehow we ended up at a Hungarian restaurant. Not exactly light. But who am I to argue with a restaurant recommendation? Especially after my friend’s mother waxed poetic about a Hungarian cake she liked so much. She couldn’t remember the name of it, but it was multi-layered. Placenta cake, she called it. And then she laughed like hell. Gee, I can’t resist a good placenta cake.

Rhapsody is in Richmond Hill, not far from Aurora. I find it a bit bizarre that I didn’t eat a classic Hungarian restaurant in Hungary, but I did in Canada. And no, placenta cake was not on the menu. Of course, neither one of us was particularly hungry. The pink pickled cabbage appetizer looked good. Cabbage is light, right? And the sampler tray, because it was full of sausage and salami. Not light, but not chock full of carbs, either.

Of course, then the food started coming.

The sampler tray contained a fantastic körözött–a spread made of smoked cheese and paprika. Even with the körözött, we couldn’t resist ordering the perogies. Stomach be damned, right? What’s a guaranteed food baby and heartburn in the face of handmade perogies, right? 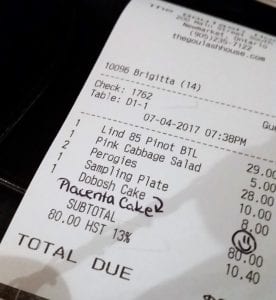 And then things got a little weird.

Our server bounces up to the table and says, “Can I interest you in dessert?”

My friend and I look at each other and start laughing. I tell the server about this placenta cake thing. We’re all cracking up now, and she says, “Well, it sort of sounds like dobosh cake.”

What is dobosh cake? No placentas are involved, I can tell you that. It’s a five layer torte made up of thin Hungarian sponge cake layers and chocolate buttercream, topped by a sheet of hard caramel. As cakes go, this one has a very specific lineage: it was developed by Hungarian pastry chef Jozsef C. Dobos, who debuted the cake at the National General Exhibition of Budapest in 1885. The first folks to try it included King Franz Joseph I and Queen Elisabeth. Oh, the recipe remained a secret until 1906, when Dobos donated his recipe to the Pastry and Honey-Makers’ Guild.

I’m still not sure how dobosh became placenta.

The Sweet Life in Toronto