Who Are the People in Your Neighborhood: Hellnar

That’s what I was thinking about while Mr. Pretty and I were in Hellnar, a tiny village on the Snæfellsnes peninsula, right on the North Atlantic, that dates back to the mid 1500s. Apparently, there’s a year-round population in Hellnar of ten people or fewer. The residents live in these little black houses. That’s some togetherness.

Mr. Pretty couldn’t imagine why they wouldn’t live farther away from each other . . . give themselves some space. I don’t know. I mean, perhaps it’s an effort to feel less alone. Hellnar is fairly isolated-ish. There are a few other small towns here and there, but nothing all that close. Maybe having nine of your friends, family, and neighbors close by is better than having no one at all.

Of course, Hellnar wasn’t always this small. In 1703, for instance, the town boasted a population of 194, plus a bunch of seasonal folks there for the work; it was one of the largest fishing villages on the peninsula. Today, though, there’s not a lot going on. You couldn’t tell that, though, the day I was there: small tours have earmarked the town as a must-see. It’s not that there were a ton of people–maybe half a dozen folks wandering around the small beach area, checking out the small plaques that describe the local wildlife. Perhaps some of them were trying to local Badstofa, a small cave that’s known for its colorful interior. 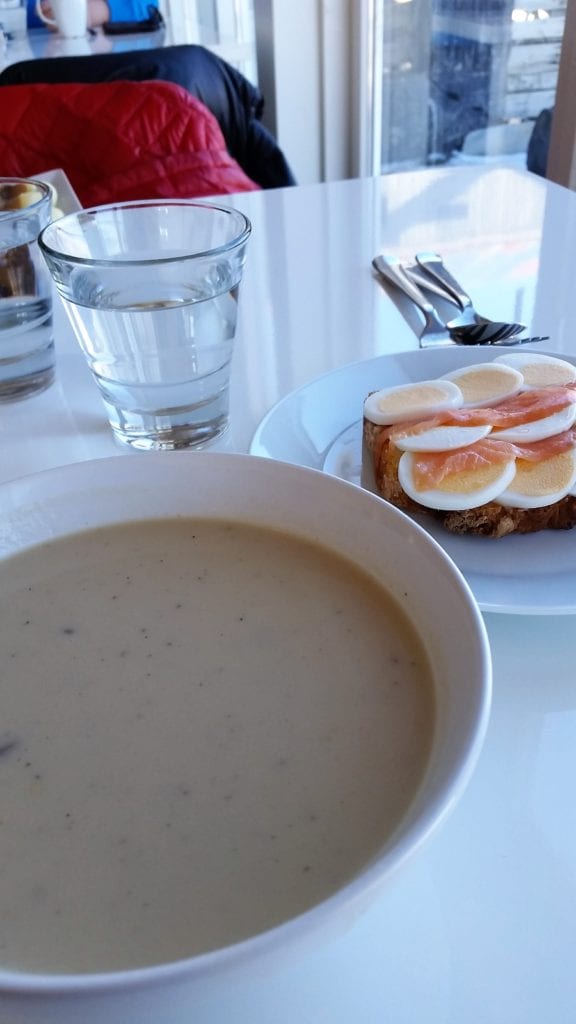 Or maybe those tours have earmarked Hellnar as the ideal pit-stop for food and a bathroom break. The real crowd was inside a cute little restaurant that overlooked the water. When I saw crowd, I mean about 10 people. Guess that means the town had double its normal population. The restaurant was surprisingly large, which I suppose means that the restaurant gets a steady stream of business. A few tables are clustered outside on a small patio, and there’s an elevated indoor section with comfy armchairs–perfect for coffee and cake. The main floor has floor to ceiling windows that provide the most gorgeous view.

The menu was mostly soup, sandwiches, coffee, and some truly lovely looking desserts. Mr. Pretty snagged some meatballs, which he said were great. My mushroom soup was very light, and the accompanying bread was delicious and homemade. The open-faced egg and smoked salmon sandwich was also made from the good homemade bread.

It was pretty obvious no one in the restaurant was a local with the exception of the server. There were different accents, different languages–Russian, British, German.

As Mr. Pretty and I sat there, taking a break for our epic drive along the Snæfellsnes peninsula, we wondered how many of Hellnar’s regular residents are employed in the tourism business. There are bound to be other options for employment, but out on the peninsula those options aren’t obvious. Maybe garbage collectors or mail delivery folks. Teachers. We speculated that perhaps Hellnar’s residents worked from home in some capacity.

It really was a nice stop-off, that little restaurant. The setting alone was enough to make me want to take a longer break and whip out my laptop to spend the afternoon working on my manuscript up in the coffee and dessert alcove. And, if you’re planning on doing the hike to Arnastapi, it’s a good place to gird your loins. Not that it’s far at all–there’s a 1.5 mile hiking trail through a lava field that connects Arnastapi to Hellnar and follows the sea cliffs, which are a Nature Reserve.

Also in Hellnar (although not in the village proper) are an eco-hotel and a pretty old church.

The Sweet Life in Toronto

The Road to No Where