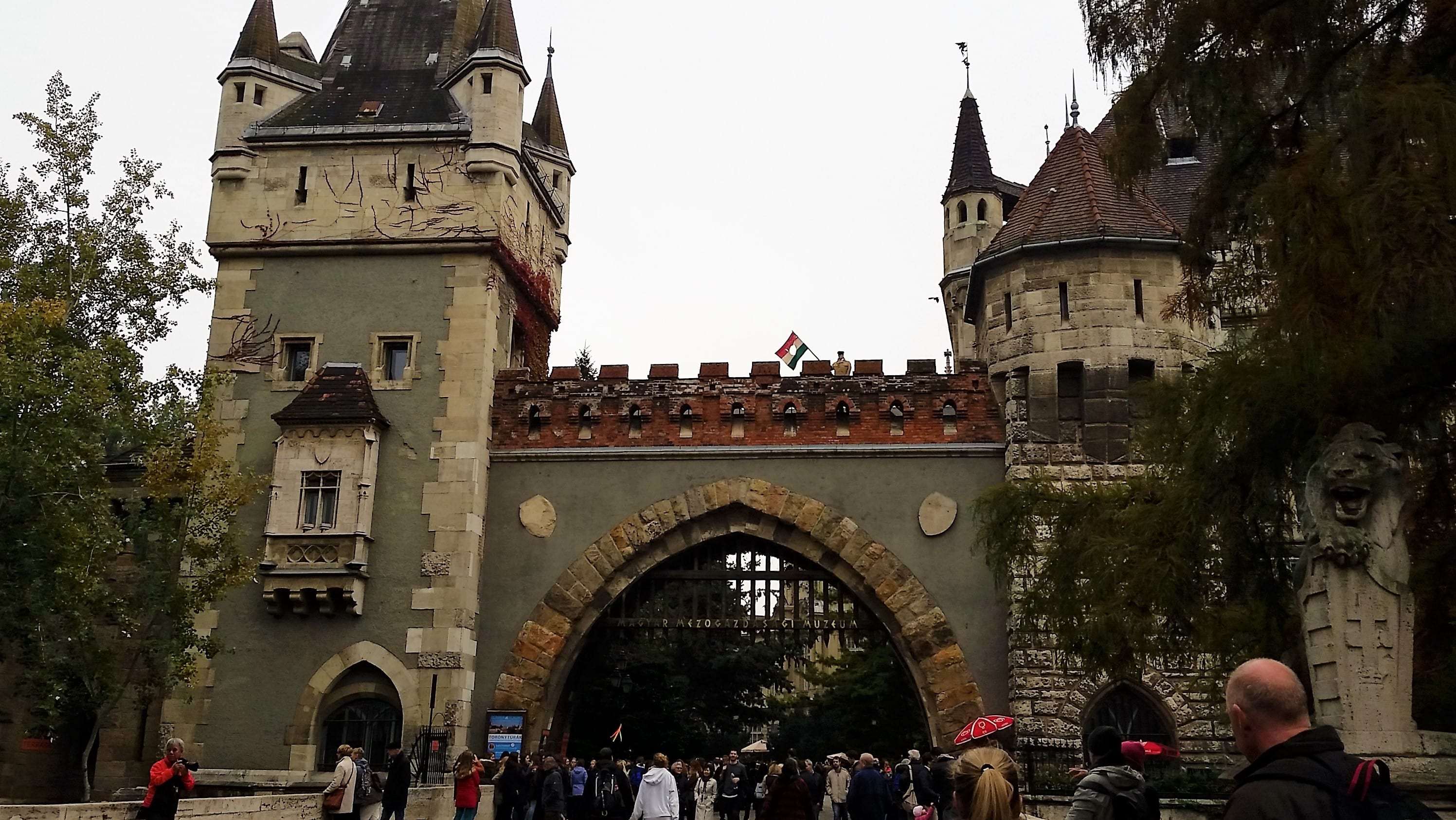 The Pen is Mightier Than the Sword

Vajdahunyad Castle is somewhat confusing, but it never occurred to me to question it. Considering Budapest has been ruled over the years by the Celts, Romans, the Magyar tribe, the Mongols, Austrians, the Turks, Germans, and the Soviet Union–and each entity has left a mark in the city’s architecture–it just seemed . . . I don’t know . . . normal. So to see a castle that includes Gothic, Baroque, Renaissance, and Romanesque architecture, well, it fit right in. Except that it’s intentional. 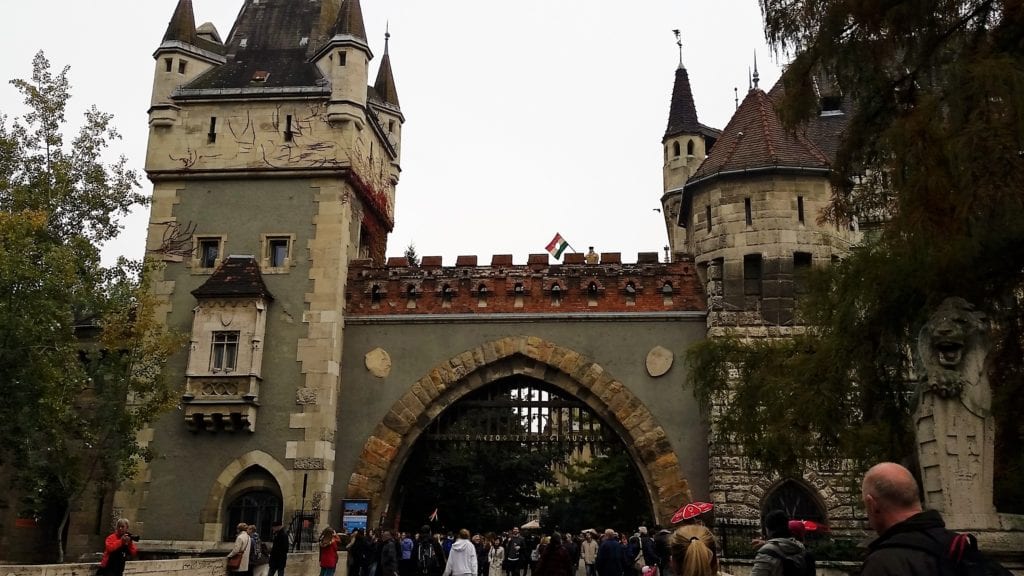 Vajdahunyad Castle is really 21 interconnected buildings, originally constructed of cardboard and wood in 1896 by architect Ignác Alpár, all for the purpose of Hungary’s millennial celebration. Each building was designed as an homage to important places in Hungary and Romania, including the Gothic wing of the castle which replicates Romania’s Corvin Castle.1 And it was supposed to be temporary, but people loved it–so the entire thing was rebuilt out of stone and brick and reopened as a permanent exhibit in 1908. Finally, it became a protected place in 1991, and it currently contains the Museum of Hungarian Agriculture.

Don’t judge me, but I had no interest whatsoever in the Museum of Hungarian Agriculture. My grandparents were dairy farmers and I grew up around a lot of farms, but that’s not enough to make Hungarian agriculture a fascinating topic. The main reason I was at Vajdahunyad Castle was to see the bronze statue of Anonymous, author of The Deeds of the Hungarians, among other possible works. This statue, sculpted by Miklós Ligeti, is also known as the Hungarian Chronicler, and it’s thought that if you touch his pen it will make you a better, more prolific writer.

Hey, I’ll take what I can get. 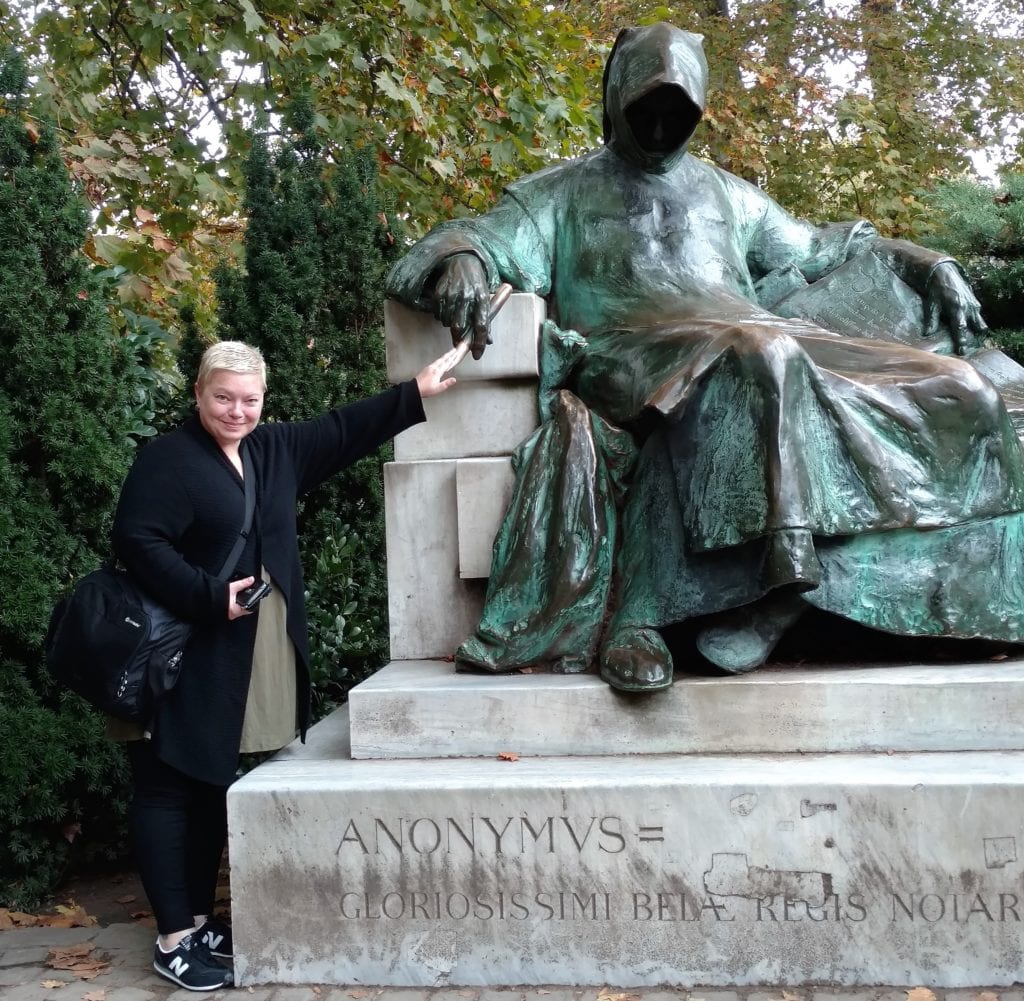 I’ve heard some folks speculate that touching Anonymous’ pen is akin to kissing the Blarney Stone in Ireland, but I certainly hope that’s not true: it’s not secret that local residents routinely piss all over the Blarney Stone so that unsuspecting tourists end up kissing the pee-covered stone. Granted, groping a metal pen coated in urine is twelve million times less gross than smooching it, but still . . .

Regardless of whether you’re into agriculture, architecture, or writing, it’s worth heading over to Vajdahunyad Castle. The grounds are quite pretty, and the castle is only one highlight of Városliget, or the City Park, where the castle is located.

Next to the castle is an artificial lake where you can ice skate in the winter or go boating in the summer. The lake was drained while we were there (late October). Farther along in the Városliget is a zoo and botanic garden, a transport museum, the Museum of Fine Arts, Széchenyi thermal baths, and Petőfi Csarnok (a concert hall). From what I understand, the Széchenyi thermal baths are the main draw for the area. That, and Heroes’ Square, which basically serves as the de facto entrance to the park.

Vajdahunyad Castle is free to access the grounds; the agricultural museum is open 10am to 5pm every day except for Monday, when it’s closed. As I said, I didn’t check out the museum, but you’ll need approximately one hour to spend on the grounds of Vajdahunyad Castle.

1. For the movie buffs amongst us, the name “Corvin” in conjunction with Romania might have perked up your film brain. The 2003 film Underworld and its sequels involve Michael Corvin, some long lost relative of the first vampire-lycan hybrid and the long-lost relative an immortal and Hungarian warlord. The first film in the series was filmed mostly in Budapest.↩

Montreal for the Holidays