This past weekend was Earth Day, and I marked the occasion by participating in Philadelphia’s March for Science. I hear that the crowd stretched about 12 city blocks, and that there were probably a little over 10,000 people. It seems kind of insane that we’d have to march in protest of the current US administration’s complete lack of interest in protecting the environment or its citizens from climate change, but here we are. I don’t expect the mere sight of thousands of scientists and science supporters to make a difference to elected politicians, but I’m hoping it sparks a sustained progressive activism and increased number of scientists running for office, much like the Women’s March did.

Why was I at the March for Science when I’m not a scientist? For a few different reasons, starting with the fact that as a nonprofit grantwriter, I rely on science to argue for funding, and as a fiction writer who often incorporates science into my novels, well-respected scientific resources are very important. But I also attended because I travel. While there were many science areas covered on signage yesterday, quite a bit of attention was brought to climate change policy and the risks of not taking climate change seriously. There’s certainly an impact on climate change from aviation. CO2 production increases as the number of flights increase, which contributes to climate change. According to Flight Diary, my air travel in 2016 equates to five ton of CO2. Ironically, the hotter climate that results from global warming will only make air traffic more difficult–more flooding, more flight delays and cargo restrictions, damage to airstrips, and more turbulence.

Part of me feels like because I can travel fairly often, I should make it a point to be a witness of sorts–see the things that won’t be there one day because of climate change. I fully admit that one of the reasons I insisted on a glacier hike when Mr. Pretty and I were in Iceland the first time in 2015 was because glaciers are an endangered species. Considering the U.S. is #2 in CO2 production, I bear a lot of responsibility for their demise (including through my travel schedule, something I try to offset through personal decrease of my carbon footprint in a number of ways).

Every place either is or eventually will be impacted by climate change in one way or another. We’ve apparently already hit the point of no return, which is potentially irreversible. Glaciers are, of course, being impacted very quickly–and so when I’m planning trips, I’m mindful of opportunities to visit glaciers. But I’m also mindful of the accompanying rise in sea levels as that ice melts. Obviously islands are very obviously affected. The Institute for European Environmental Policy put out a paper on European island impacts of seas rising in 2013, which includes risks to Rhodos, a Greek island I visited about 15 years ago. The old town is a really wonderful and interesting place, but climate change is likely to lead to water shortages and higher temperatures that will negatively impact tourism (among other impacts). It makes me sad to think of the Rhodos being rendered largely uninhabitable.

Venice is already seeing serious repercussions of climate change. Look, Venice has a lot of problems, not all of which are climate change related. You can’t build a city on sediment without expecting settling. And then people went and made the problem worse by pumping out groundwater, which accelerated the settling. There’s also plate tectonic issues that have to do with the weight of the Alps. Studies indicate that things are pretty dire, though:

The results revealed the city is naturally subsiding at a rate of about 0.03 to 0.04 inches (0.8 to 1 millimeter) per year, while human activities contribute sinking of about 0.08 to 0.39 inches (2 to 10 mm) per year. […] And the problems are compounded by rising sea levels resulting from climate change. The Northern Adriatic Sea is rising at about 0.04 inches (1 mm) per year. 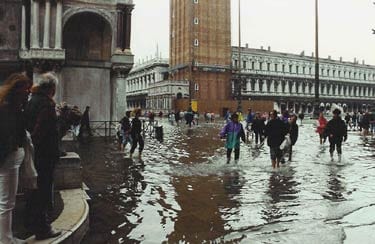 The famous acqua alta flooding has typically occurred four times per year, but now it’s happening up to 60 times per year. And if Venice isn’t flooding, they’re experiencing record water lows that beach gondolas. All this to say that I feel like I need to make time to visit Venice now before things get worse and it sinks into the sea entirely.

I suppose if that’s how I plan all my trips, I’ll be racing from one potential disaster to the next. It sounds like it would be slightly depressing, if not frantic. Probably not the most enjoyable way to travel.

The Pen is Mightier Than the Sword

Where the Puffins and the Glaciers Roam…and Beyond
Jun 7, 2020