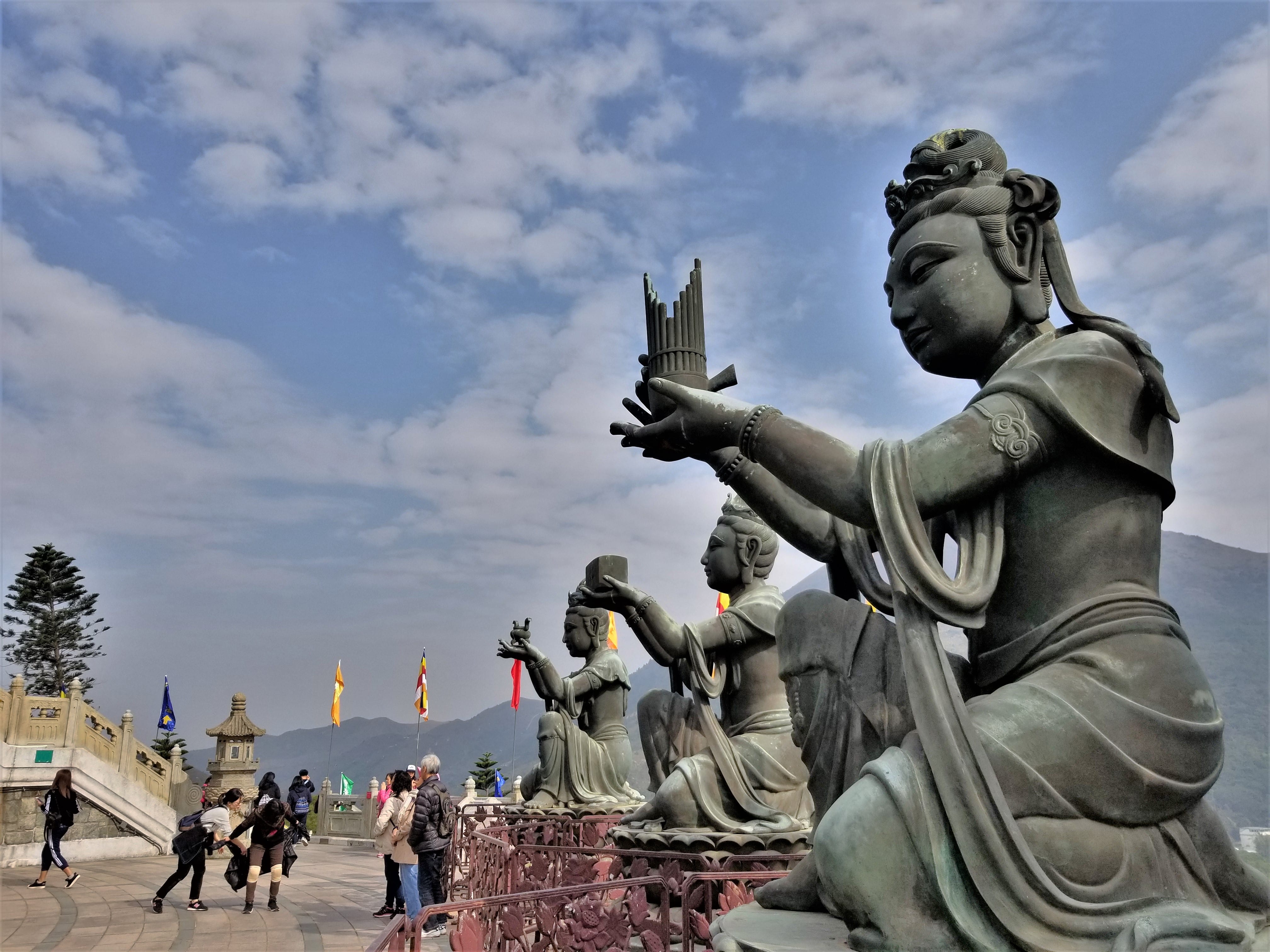 Suffering for the Buddha

The first truth of Buddhism is that life is suffering. Little did I know that I would find out first-hand in Hong Kong. 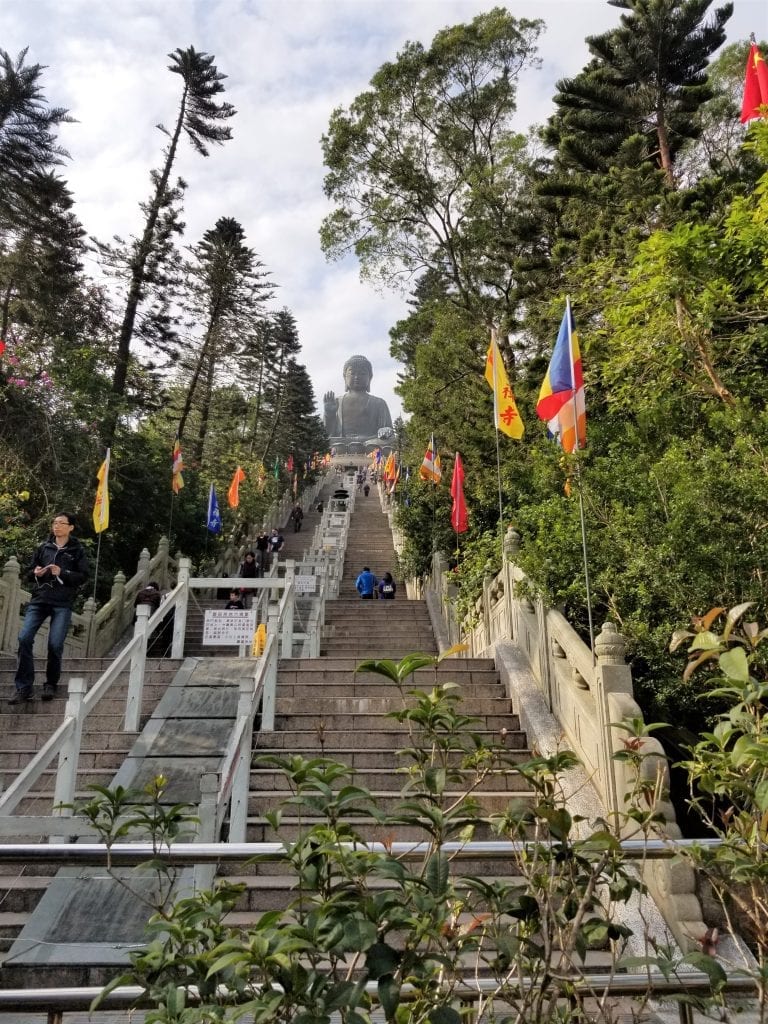 Mr. Pretty and I approached the base of the Tian Tan Buddha on Lantau Island, and my lungs immediately seized up. No, it wasn’t the famous Hong Kong air pollution. Okay, maybe it was–just a little. Plus, the combination of the cold that I’d started coming down with the day before our flight to Hong Kong and the eight bajillion flights of stairs leading up the actual buddha.

Fine, it was 268 steps, but when you’re congested, it does indeed count as suffering. Sure, the second truth of Buddhism is that wanting things causes suffering, which means that I simply could have decided that getting to the top of the stairs wasn’t necessary or important–which would have lessened my suffering in theory, and that would have led to the third truth of Buddhism: suffering can be overcome by giving up our useless cravings.

I am clearly a glutton for punishment, because up we went.

We did make it to the top of the stairs, and the Tian Tan Buddha was glorious up close and personal. Well worth all that suffering. The crowd was a mix of regular tourists and religious pilgrims, with people who were really there for the Buddha walking singly and in groups around the base, hands pressed together in prayer and audibly humming. In some cases, people might stop and bow to one of the six devas who surround the Buddha with various offerings. It was fascinating. 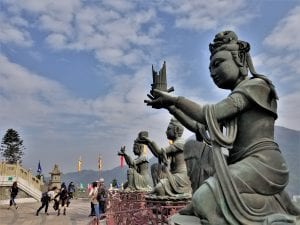 The Buddha’s right hand is raised, which is supposed to represent the removal of afflictions, but trust me when I say I was still afflicted with the creeping crud (but more on that later). I blame myself that I wasn’t instantly healed: Mr. Pretty and I didn’t buy tickets to go inside the building beneath the Buddha, which allegedly contains the cremated remains of Gautama Buddha. My bad.

I did feel well enough to also visit the Po Lin Monastery, which is located adjacent to the Tian Tan Buddha. Of course, I did think I was having a massive hallucination when I saw the feral cow herd wandering aimlessly through the streets. No, really–cows. With horns. If it weren’t for Mr. Pretty stopping short and staring, slack-jawed, I might have continued thinking I was losing touch with reality, and fast. 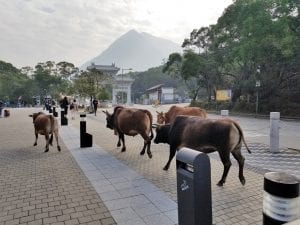 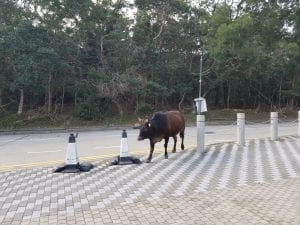 The cows are real, though: they’re the remains of a former dairy run by a Trappist monastery on Lantau Island. Last year there was a petition made to move the cows (and buffalo–there are also feral buffalo!) to a deserted island, which has been met with opposition. The things you learn, eh? Whatever the case, all I could think of in the moment the cows appeared (other than wondering about my sanity) is that scene from the film Twister . . . I gotta go, Julia; we got cows.

Despite my status as Typhoid Mary, I managed to enjoy my time on Lantau Island, particularly Po Lin Monastery. Mr. Pretty and I took a break in the courtyard to watch people pray, then took a very leisurely stroll around the grounds. We saw the main temple with its three buddhas that represent the past, the present, and the future. There’s a vegetarian restaurant on the grounds, and lots of monks, of course. 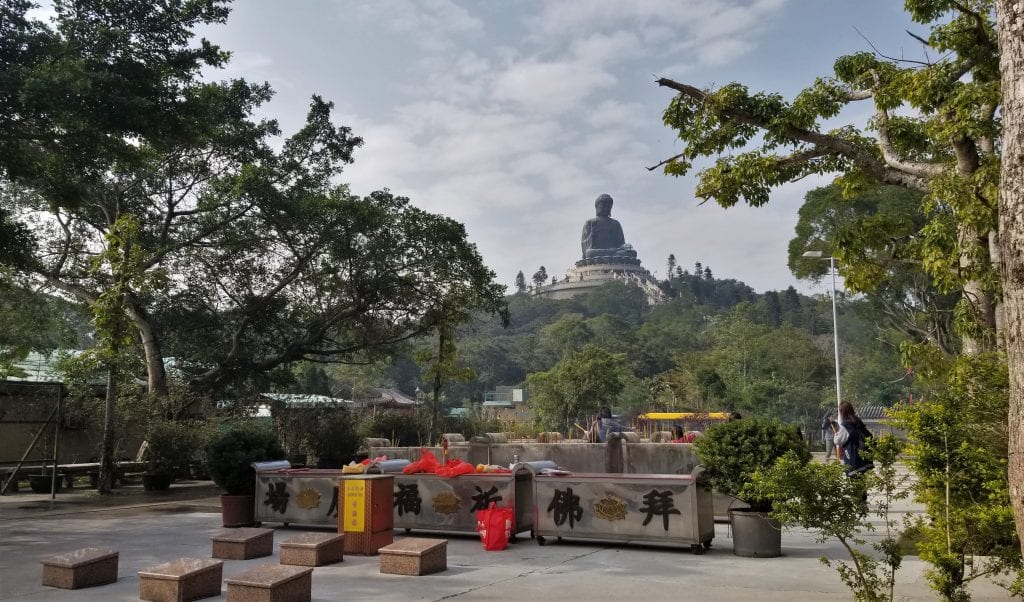 On a side note, I later found out that Po Lin Monastery is a hot bed of intrigue and scandal. Just last month, for instance, photos surfaced of a head monk and one of the nuns shacking up together in Hawaii–including the nun in a bikini on the beach. And a few years ago one of the nuns was charged with mismanaging millions of dollars and building stuff on land that didn’t belong to the monastery, and the monastery was caught up in a fake marriage scam, too. 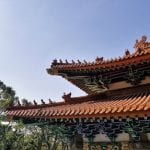 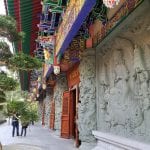 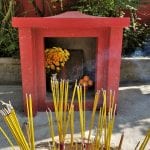 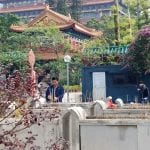