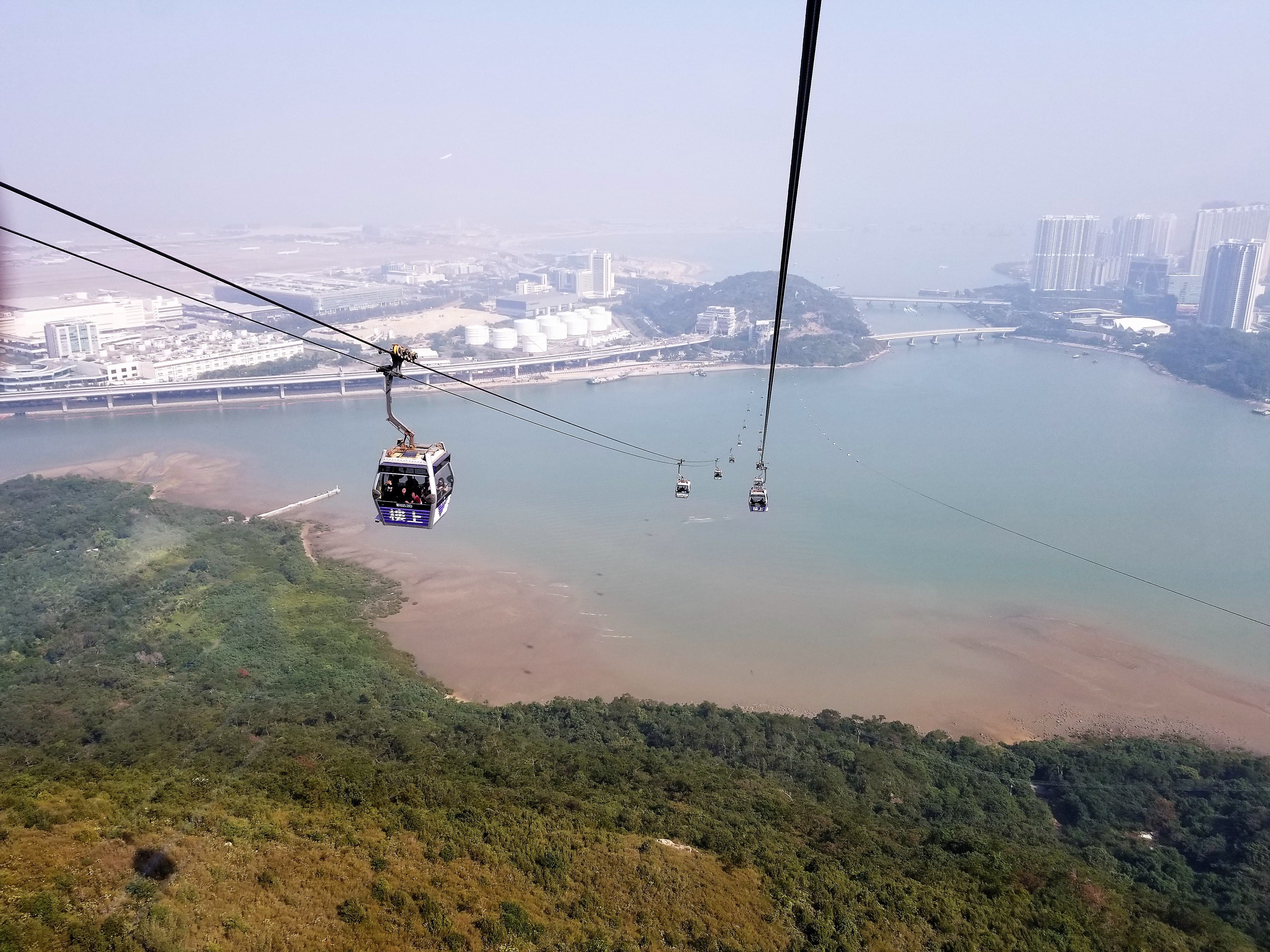 “I’m planning a surprise for Mr. Pretty in Hong Kong,” I told a co-worker. “He’s going to hate it.” And then I laughed maniacally.

My last post detailed a trip to Lantau Island to visit Po Lin Monastery and the Tian Tan Buddha; I neglected to mention exactly how we got there. There are a variety of options, you know. Take the MTR to Tung Chung station and then the New Lantau Bus No.23 to Ngong Ping. Take a ferry at the Central Pier No.6 to Mui Wo, then the New Lantau Bus No.2 at the Mui Wo Bus Station to Ngong Ping. Hell, you could drive if you’re crazy enough to rent a car. You could even take a cab or an Uber. But those are boring choices.

I chose the Ngong Ping 360 cable cars–a 5.7 kilometer (that’s just over 3.5 miles) journey from the Tung Chung metro stop to Ngong Ping, dangling high above water, trees, and mountains for about 25 minutes. That’s not really the surprise. Mr. Pretty has no great love of heights, but he’s reasonable. No, the surprise was that I booked the so-called crystal car for our ascent. 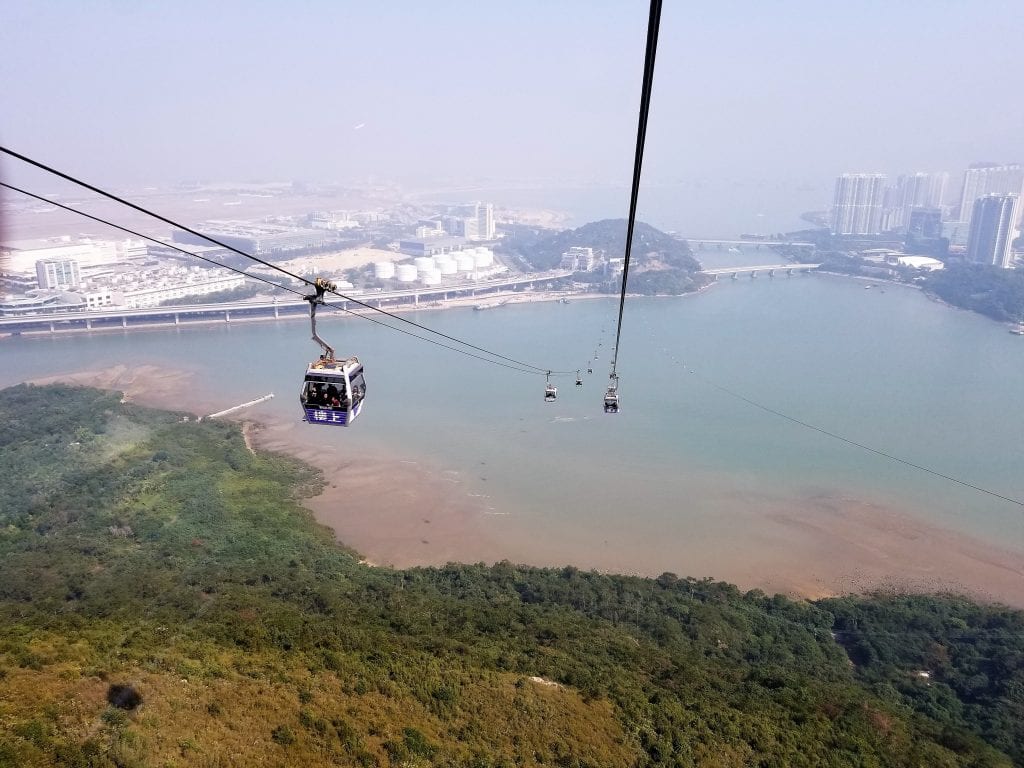 The crystal cars have glass bottoms. And anytime a video that shows the glass bottom bridge over Zhangjiajie Grand Canyon in China or anything like that, Mr. Pretty turns a particular shade of green and shakes his head.

Imagine my shock (and slight disappointment) when he said nary a word. I’m not sure if he was just trying to keep his street cred in front of strangers (we were in the car with a German family and a Chinese family), if he was too concerned about my health and whether I might pass out from sinus pressure of my cold, if he was too excited about generally being in Hong Kong, or if it simply wasn’t that scary. The Hong Kong air pollution was particularly bad that day, so views were limited, for sure. 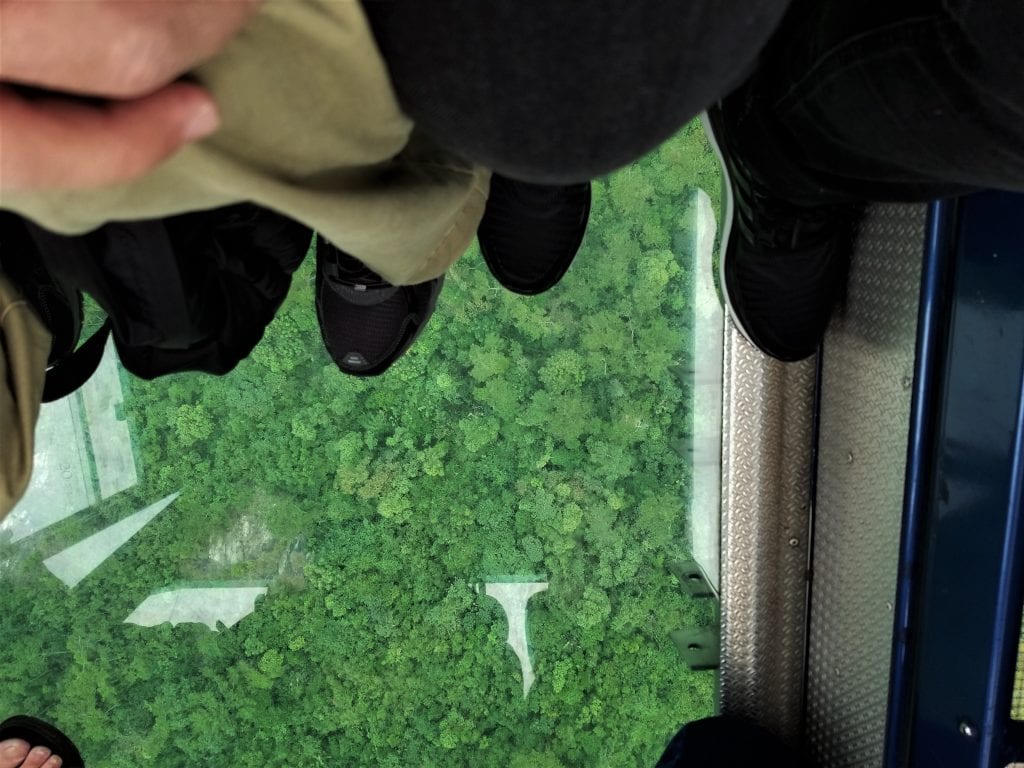 Mostly, I think he was just grateful that we weren’t hiking through the North Lantau Country Park, which includes a boat-load of steps up and over mountains. Through our glass-bottomed cabin we saw tiny hikers huffing and puffing up the steps, clutching their chests and passing out from exertion (okay, not that last part).

For the most part, though, it was just a blanket of tree tops below. Not really all that freaky looking, right?

Maybe I should have told Mr. Pretty about that time back in 2007, about a year after the Ngong Ping 360 started operations, when a cable car randomly fell off the wire and plummeted into the hills. Or about the various operational problems that left passengers stranded for hours. Nah. I mean, really, I’m not a horrible person . . . just amused by making Mr. Pretty vaguely uncomfortable occasionally.

Our ride back to the mainland saw us alone in a regular cabin. The staff there usher you into a car, make you crowd together for a photo, and off you go (that’s both ways, by the way–and at the termination of your ride at either end, as you emerge from the terminal an excited staff person rushes to you to offer to sell you your photo), without any sort of instructions. No “please don’t jump wildly up and down in the car” or “please don’t make your car swing like a pendulum.” There is a placard in each car in Cantonese and English that warns you not to throw anything out of the car, but how would you even manage it? The cars are entirely enclosed . . . which then made me wonder if it’s possible to pry the doors open.

In the end, I’m glad we chose the Ngong Ping 360 are our mode of transportation. It was at least interesting, even if it wasn’t the cheapest option: the round-trip journey (with the crystal cabin on the way up to the Buddha) for two people was $59.39 USD. Maniacal laughter not included.

Suffering for the Buddha