Every place to which I’ve traveled has a feel when I’m walking down the street. Whether it’s romantic, gritty, artsy, or something else, it’s what stays in my brain when I think back on a city once I’ve left. Hong Kong will never have just one feel for me. In many ways, Hong Kong is like a city of neighborhoods (a lot like my adopted hometown, Philadelphia). More than that, though, it’s a city that changes by the street.

Yau Ma Tei was our first stop in Hong Kong. The neighborhood is very traditionally Chinese, a mix of retail and high rise apartments. A lot of tourist websites call it an “underappreciated” or “often overlooked” neighborhood, and this may be true–we didn’t see a ton of obviously non-Chinese folks during our travels through the area. Yau Ma Tei is most well-known, though, for the Temple Street Night Market. 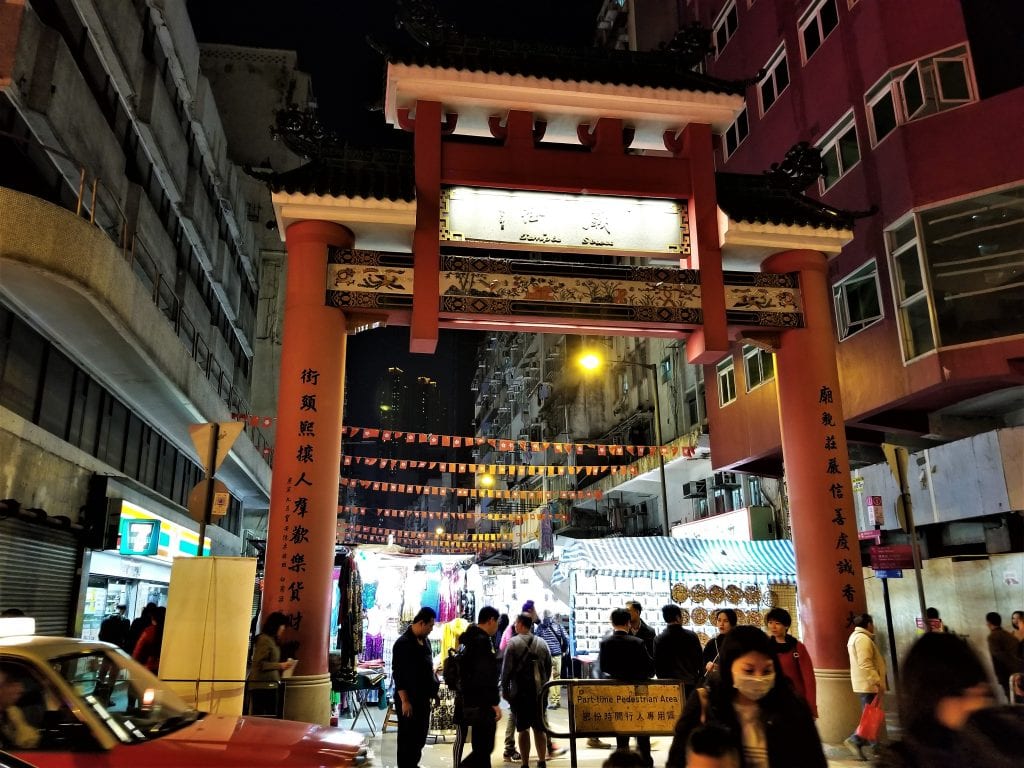 I must admit that I was simultaneously charmed and amused by the Night Market. Charmed, because the setting is very much what you imagine a street market in Hong Kong to be–crowded, slightly mysterious, dark and bright at the same time, tons of street meat. The market is situated in a small street between two towering apartment buildings, which look slightly run-down and grungy, and strings of drying laundry hang from the windows. Amused because it was filled with vendors selling a lot of crap, and pretty much the same crap. Except for one very dark end of the market, which is lined with sex toy vendors and sex workers. It should be noted that particular end of the market led directly to our hotel . . . and attached to our hotel was a sex worker-esque massage parlor.

Well then. Perhaps it’s not surprising that the Temple Street Night Market is aimed at men’s interests. 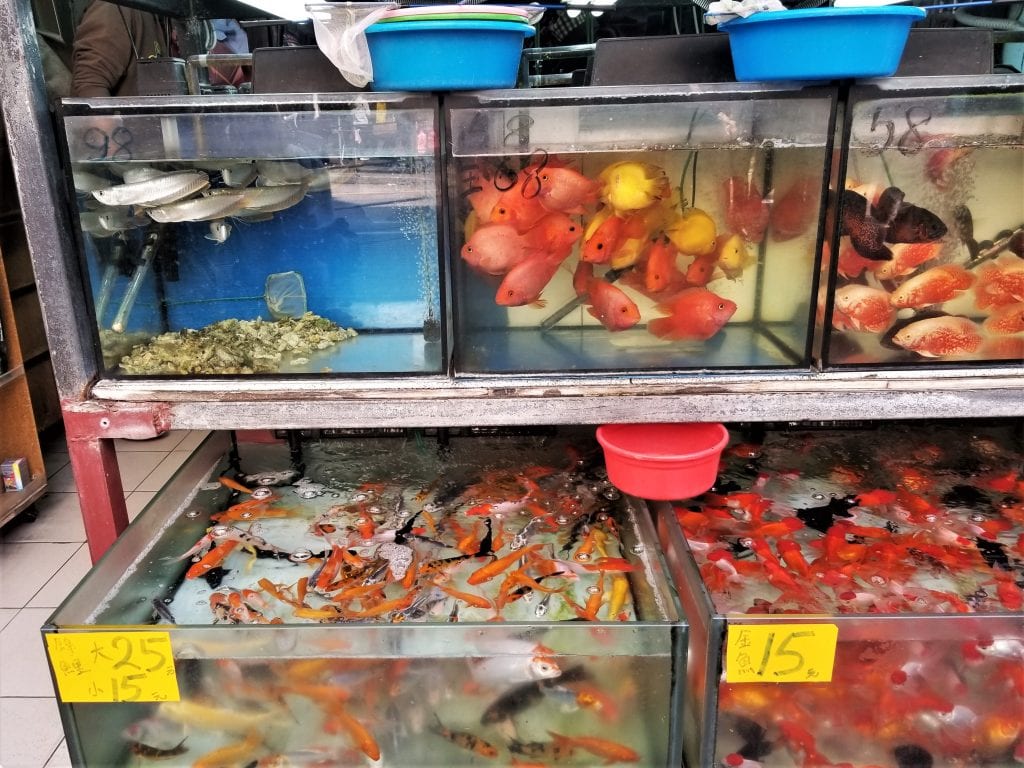 Goldfish Market Street was, of course, a street where you can buy goldfish and many other types of pet fish. Some are in tanks, but others are in big aerated plastic bags. There were tiny fish up to massive fish, fish of all colors and shapes. Beautiful, really. Goldfish are popular in Hong Kong as pets for a few reasons–because of the lack of space to keep dogs and cats (although there were plenty of people with pet dogs running around), but also because fish symbolize good fortune, and water attracts energy of wealth and abundance. Spanning the length of Tung Choi Street, from the intersections at Nullah Street to Mongkok Street, this shopping district is more than just goldfish–we saw turtles, snakes, kittens, and puppies. Of course, I felt a bit self-conscious walking down the street. It’s not like I can buy a goldfish and take it home with me, as much as I would have loved to. Vendors cater to locals, not tourists, so I tried to stay out of the way and unobtrusive.

I felt slightly more welcome at the Flower Street Market, which runs down one side of Prince Edward Road. There are plenty of plants for sale, but also tons of fresh cut flowers–and every single bloom and plant was perfect. Seriously: perfect. Gorgeous bouquets of flawless roses and ranunculus. Robust pots of scarlet and white pointsettias. Flowers that I’ve never seen before. 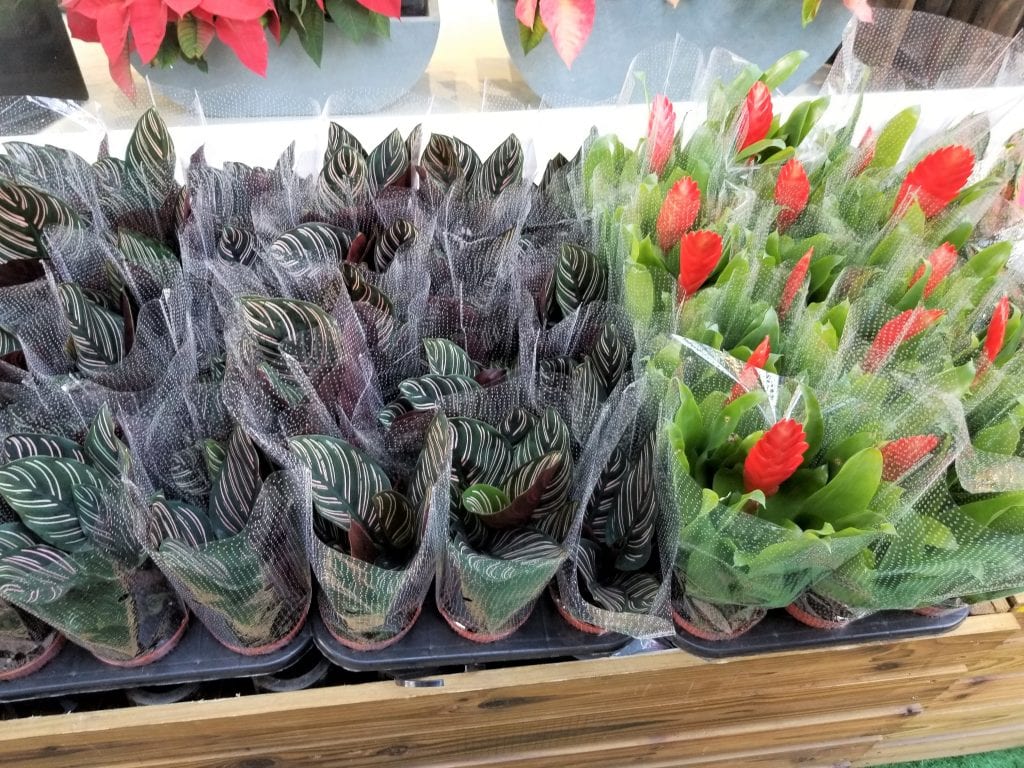 Hong Kong, to me, smells like stale exhaust, which makes sense given how bad the air pollution is. That said, the Flower Market smelled . . . fresh. Green. Fecund. I could have happily sat around there all day, sniffing like a dog who has caught a scent.

Still, the vendors cater to the locals here. A tourist can’t generally buy an orange tree and get it onto a plane. Well, maybe it’s possible. There are rules about bringing agricultural products back into the States in case whatever it is harbors pests that could damage crops or the environment. I found it hard to resist the bouquets, though. Fresh flowers–particularly gorgeous, perfect flowers–make everything better, even a hotel room. 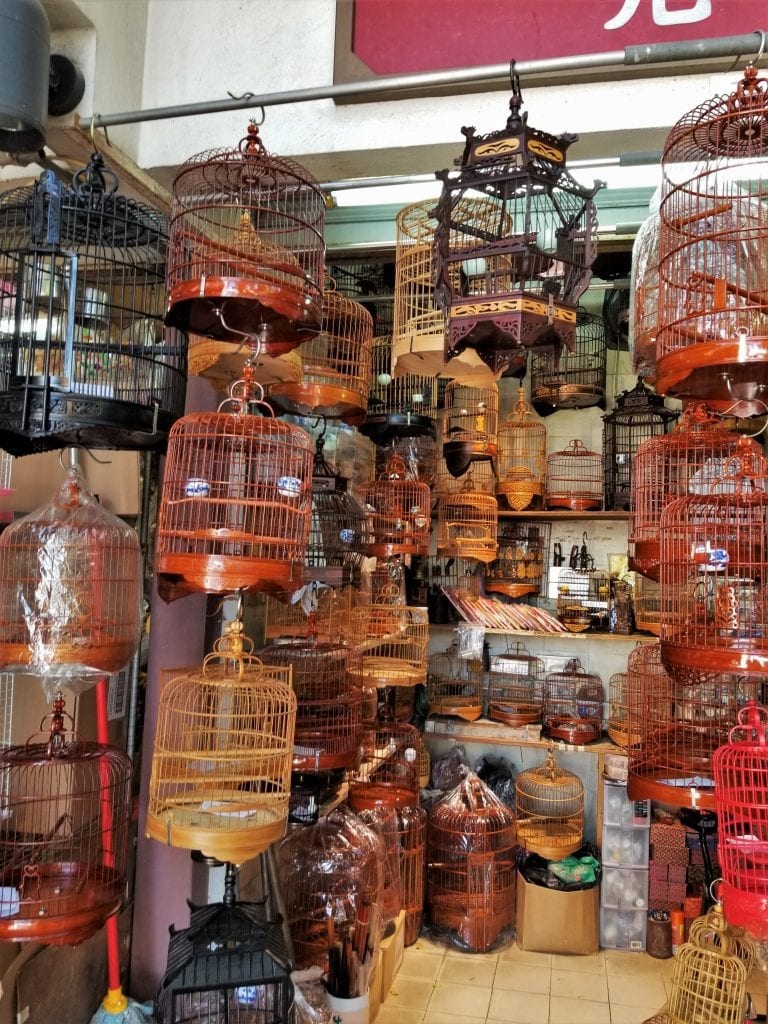 At the end of the Prince Edward Road is the Bird Market. Here, too, is a place where the vendors cater to locals and all but ignore tourists–which makes sense. What tourist is going to buy a bird? The Bird Market feels very . . . set-up. Less organic or maybe more deliberate than the Goldfish Market and Flower Market, and now I know why–gentrification in Hong Kong in the mid-1990s razed the market, and 60 vendors were relocated to the current location. Some people do prefer the new market; it’s apparently greener and more spacious. That said, there’s something very planned about it that gives it a different feel than the other markets.

Maybe it doesn’t matter. The Yuen Po Street Bird Garden is noisy with the sound of birds and filled with species even the bird-crazy Mr. Pretty didn’t recognize.

We walked through other markets, as well–the Ladies Market, over on the Hong Kong Island side, the Cat Street Market. But what we discovered is that each street, no matter which side of Hong Kong you’re on, seems to have a purpose. The walk from our hotel near the Temple Street Night Market to the nearest metro station was awash in shops selling kitchen products. More accurately, cooking tools. Pots, pans, and everything a professional chef might need. One day we ended up randomly wandering and found a street entirely devoted to tools. 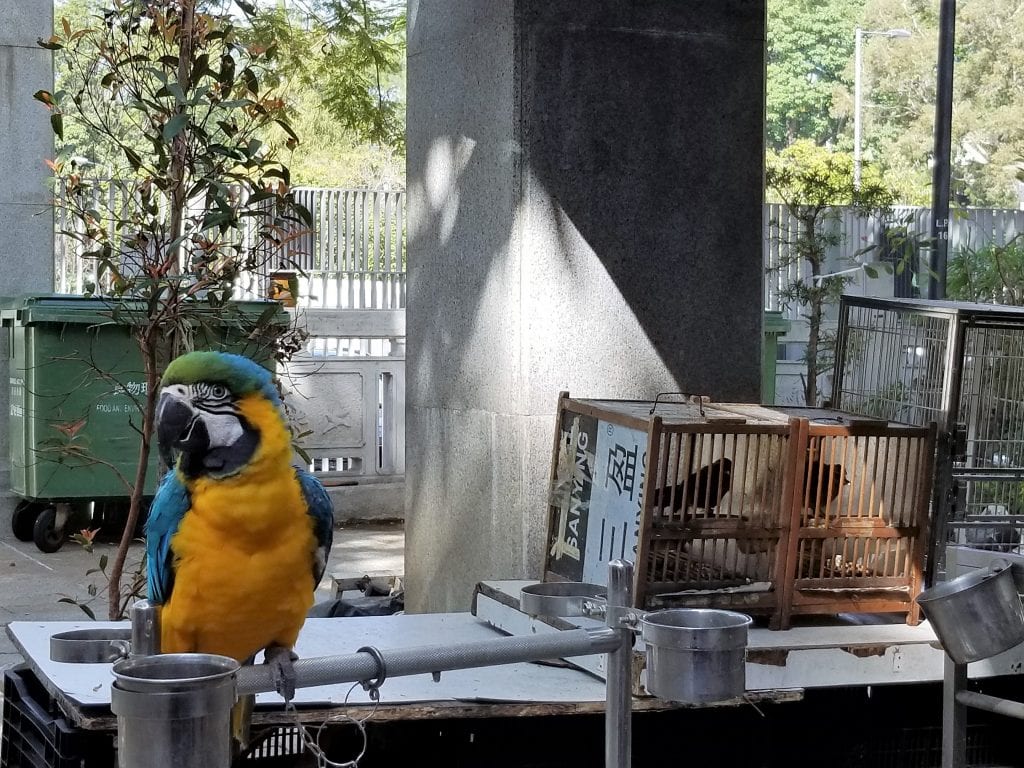 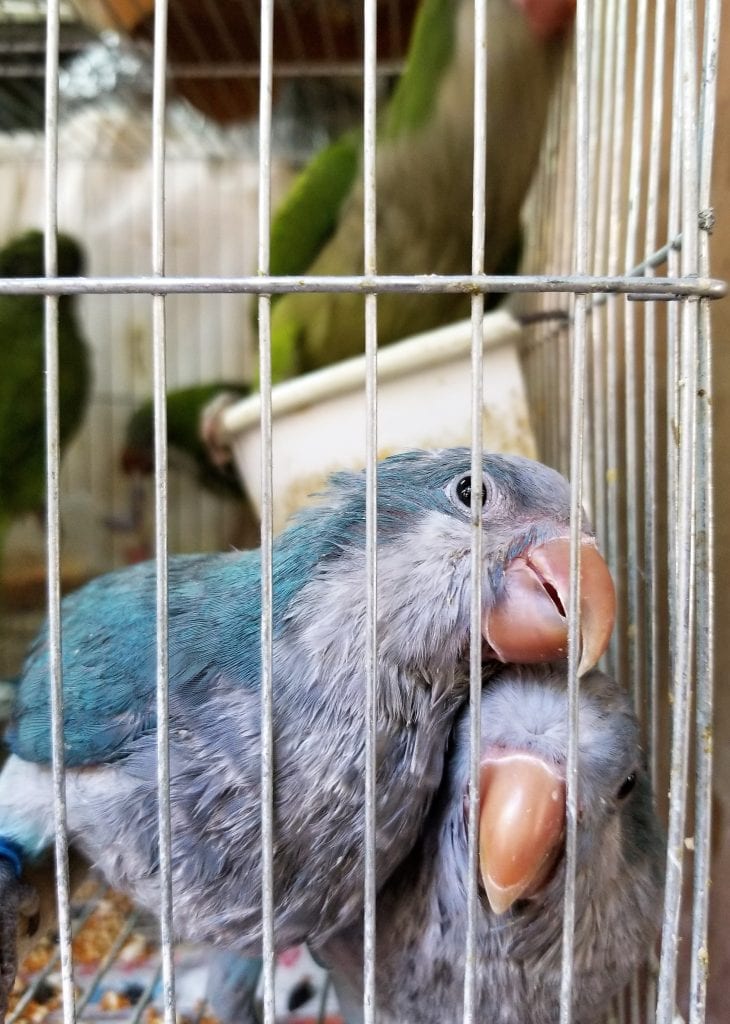 One of my favorites was a series of streets near our second hotel, on the Hong Kong Island side near the waterfront, that was entirely devoted to dried seafood. Being on Hong Kong Island, the area has an entirely different feel. It seems brighter somehow, newer, although no less congested.

I recognized most of the dried seafood–lost of dried mussels, shrimp, etc. But then there were these white and black blobs that sort of looked like withered penises. We figured out later that they were dried sea cucumbers, but what does one do with dehydrated sea cucumbers? Apparently, you either eat them or make them into medicine. They were plentiful, for sure, which makes sense–apparently they are part of a common Chinese New Year dish, and we were in Hong only a few weeks before Chinese New Year. I also discovered just yesterday that you can buy a pack of American-caught dried sea cucumbers from Walmart. Huh. Who knew? 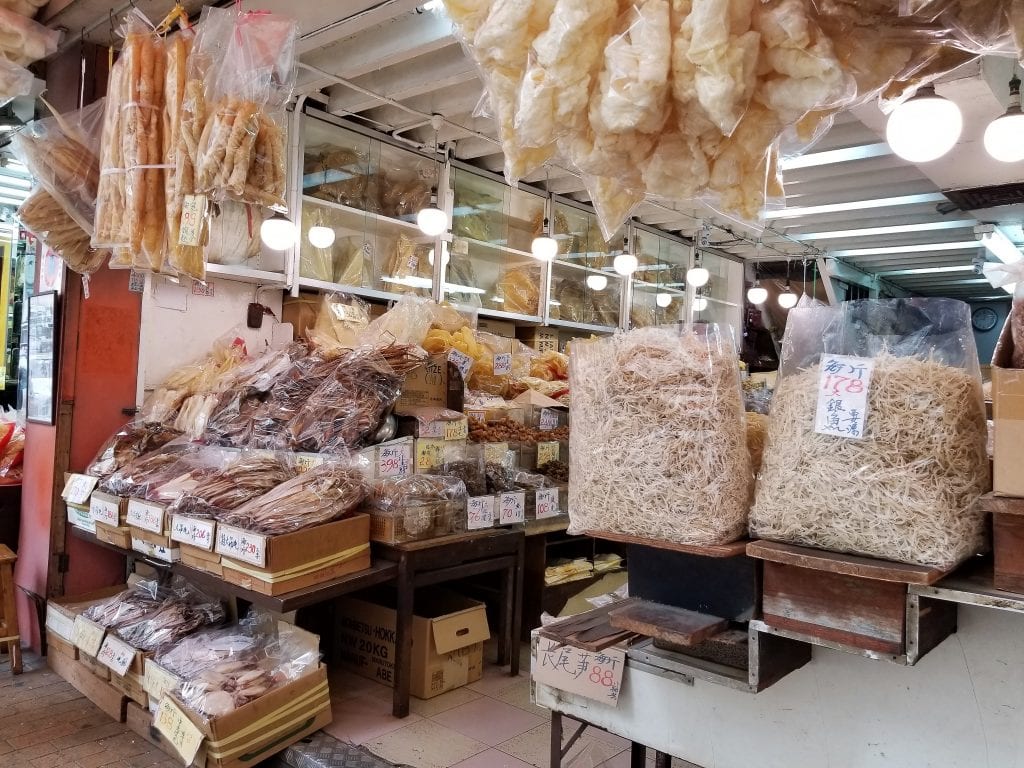