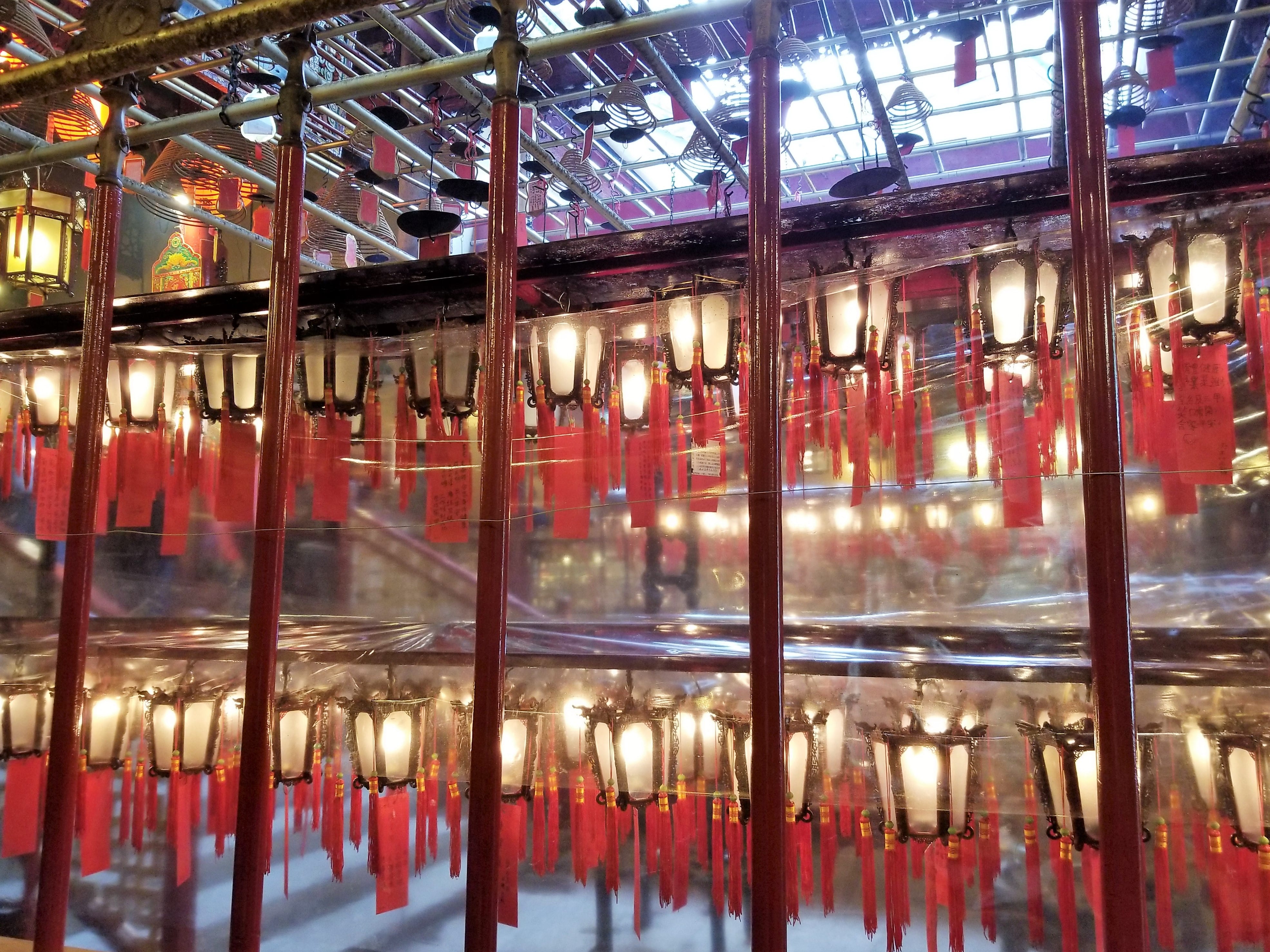 Normally Mr. Pretty and I are not church-visiting people unless there’s something out of the ordinary–an old and moldering saint body part, a piece of art, etc. We made an exception in Hong Kong, primarily because Buddhist temples are so interesting. Plentiful, too: there are over 600 Buddhist temples in Hong Kong. 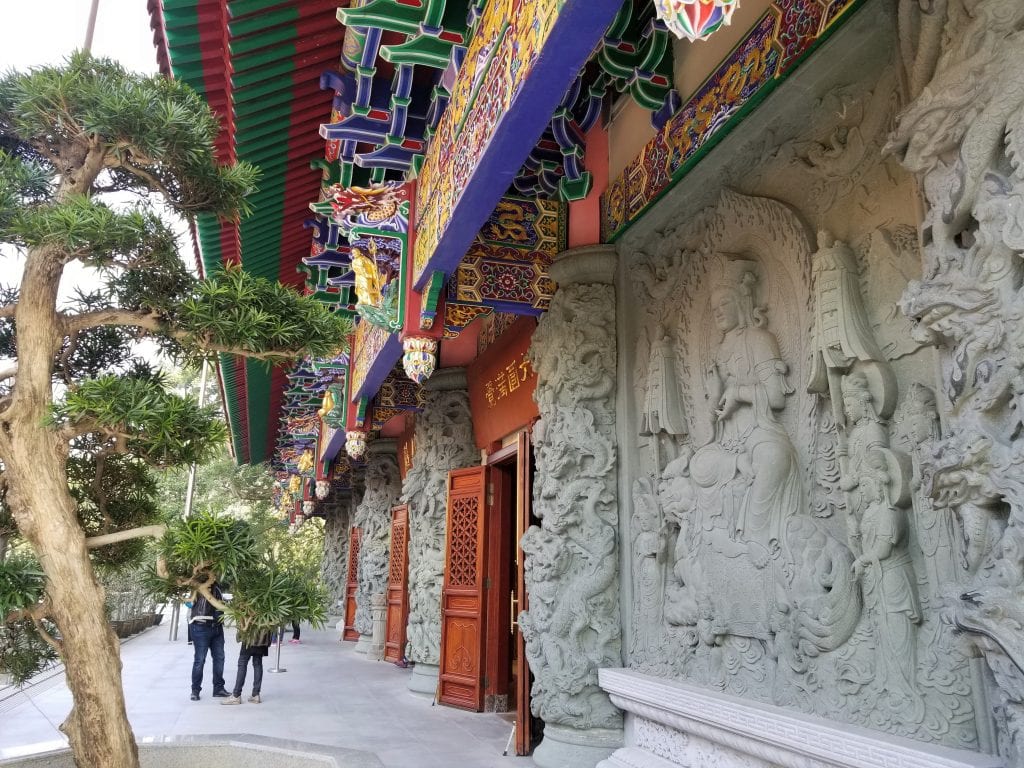 The first temple we visited, of course, was the temple at Lo Pin Monastery on Lantau Island, the Grand Hall of Ten Thousand Buddhas–which technically is more of a shrine hall than a traditional temple. It’s a fairly new building, completed in 2014. The inside is very gold, and there really are ten thousand Buddha statues inside. You’re not supposed to take photos, though, so I didn’t. I already had a cold; it seemed like a bad idea to tempt fate by doing something for which I could be struck down by karma.

Being your standard-issue Westerner, I wasn’t sure what the rules were at temples–not just for photography, but for visiting. Would it be okay for some random non-Buddhist to go traipsing through a Buddhist temple to gawk at the interior? More on that later, but let it suffice to say that I peeked through the door of the Grand Hall of Ten Thousand Buddhas and kept moving. 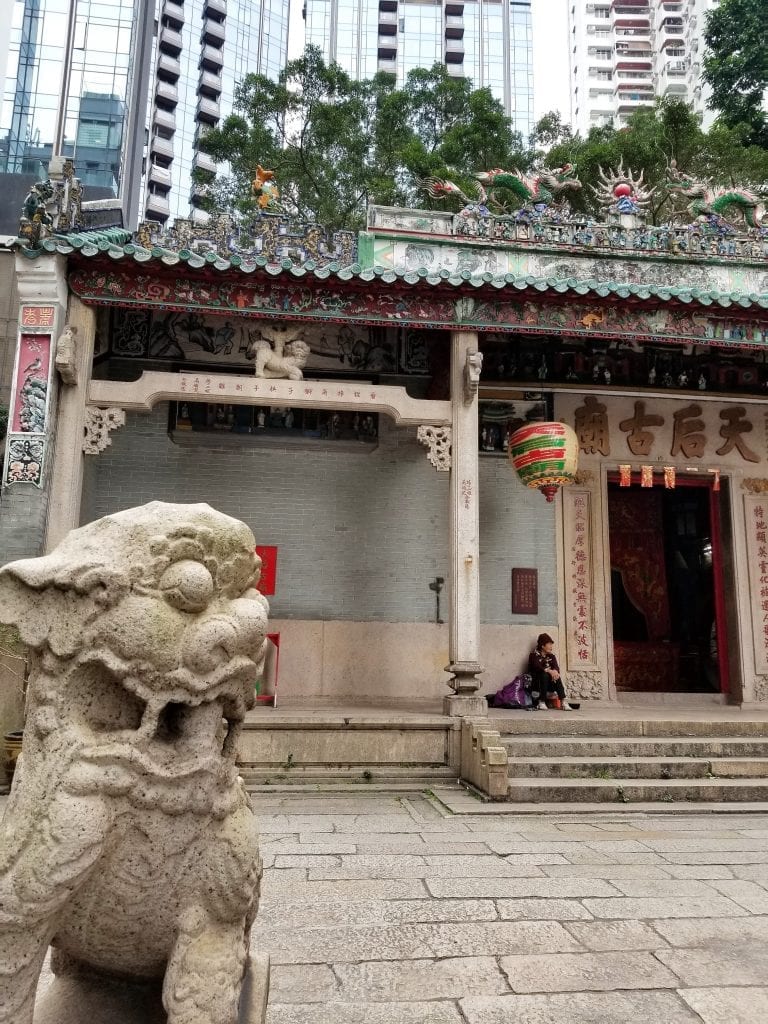 The second temple on our Temple Trail adventure was Tin Hau Temple on Causeway Bay. Here’s one I really wish I would have gone into, mostly because it’s so old–the temple was built in the early 18th century. It’s one of several Tin Hau temples in Hong Kong, that is a temple with altars to Tin Hau, the goddess of the sea; there are side altars at this temple dedicated to Tsoi San (god of wealth), Kwun Yum (goddess of childbirth), and Pau Kung (the Lenient Judge of the Underworld). The temple was originally a waterfront temple, but is not quite a few blocks from the bay thanks to land reclamation.

The woman sitting by the door seemed to greet everyone entering the temple. I’m told she was begging for money. Just to the right of the stone steps up to the door was a long stone table where people were lighting incense sticks as an offering. I later learned that this part of the worship process is meant to burn away your negative qualities, leaving you pure.

Mr. Pretty and I were taking a bit of a rest stop outside Tin Hau Temple when I received the news that Doug Jones had won the Alabama Senate race over Roy Moore, which seemed somewhat appropriate. It took all of my willpower not to do the Snoopy dance right there in front of the stone lion, which I suppose would have given everyone at the temple that day a good story of their own–the day they saw some weird blonde woman having an excited fit.

Lin Fa Kung Temple, used at one point to worship Guanyin, the goddess of mercy, was only right down the street. Originally built during the Qing dynasty in 1863, it was reconstructed twice in the late 20th century. People still come here to pay tribute to Guanyin on certain days. It was at this temple that, while peeking in the door, I was invited inside by a very sweet woman, who made sure I felt welcome. The inside of the temple was gorgeous, all red and dark wood, with a collection of lotus flower lamps throughout. Incense burned, with the smoke giving the inside of the temple a light haze. 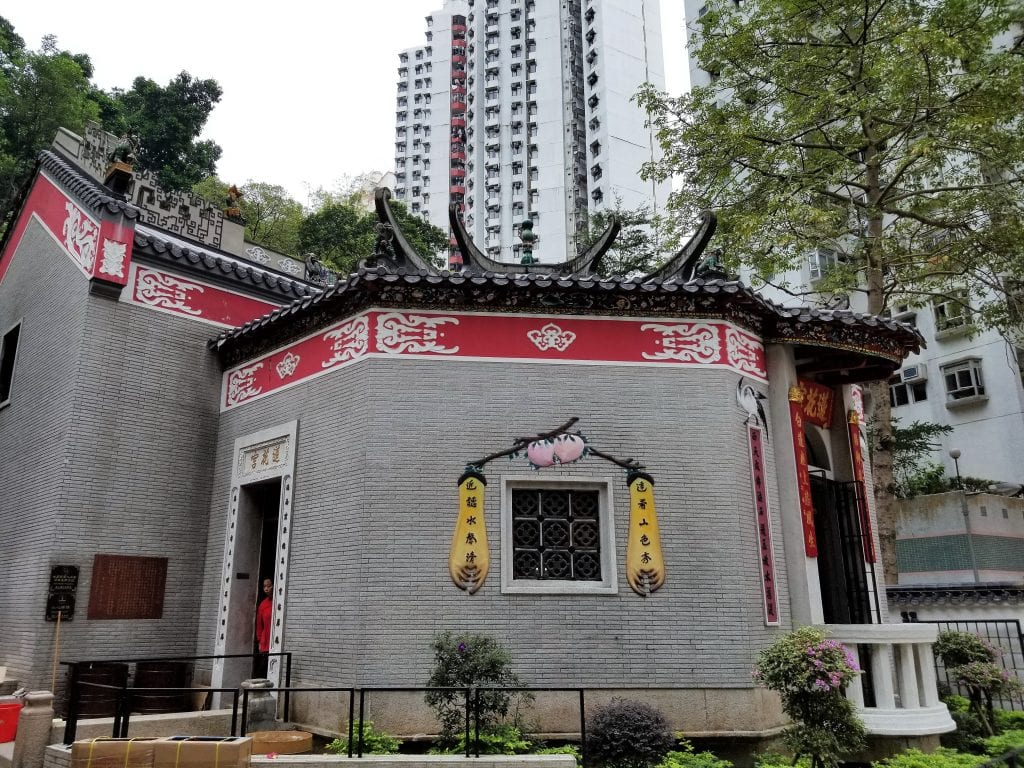 Last but most certainly not least was what seems like the most-visited of the temples I visited, Man Mo Temple, a tribute to the god of war and the god of literature. Located in the Poho neighborhood on Hong Kong Island, never-ending crowds passed in, out, and around the temple. There were even bus tours that stopped by, and on our last day in Hong Kong there was something–a television show? a film? a commercial?–being filmed outside the temple. With so much activity and everyone in the world snapping photos, I didn’t feel weird about getting a few shots of the interior (click to embiggen). 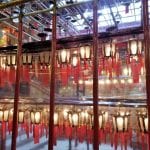 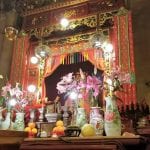 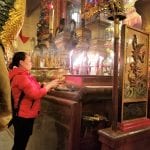 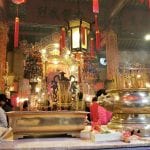 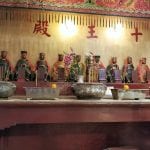 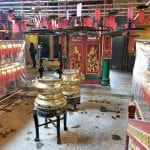