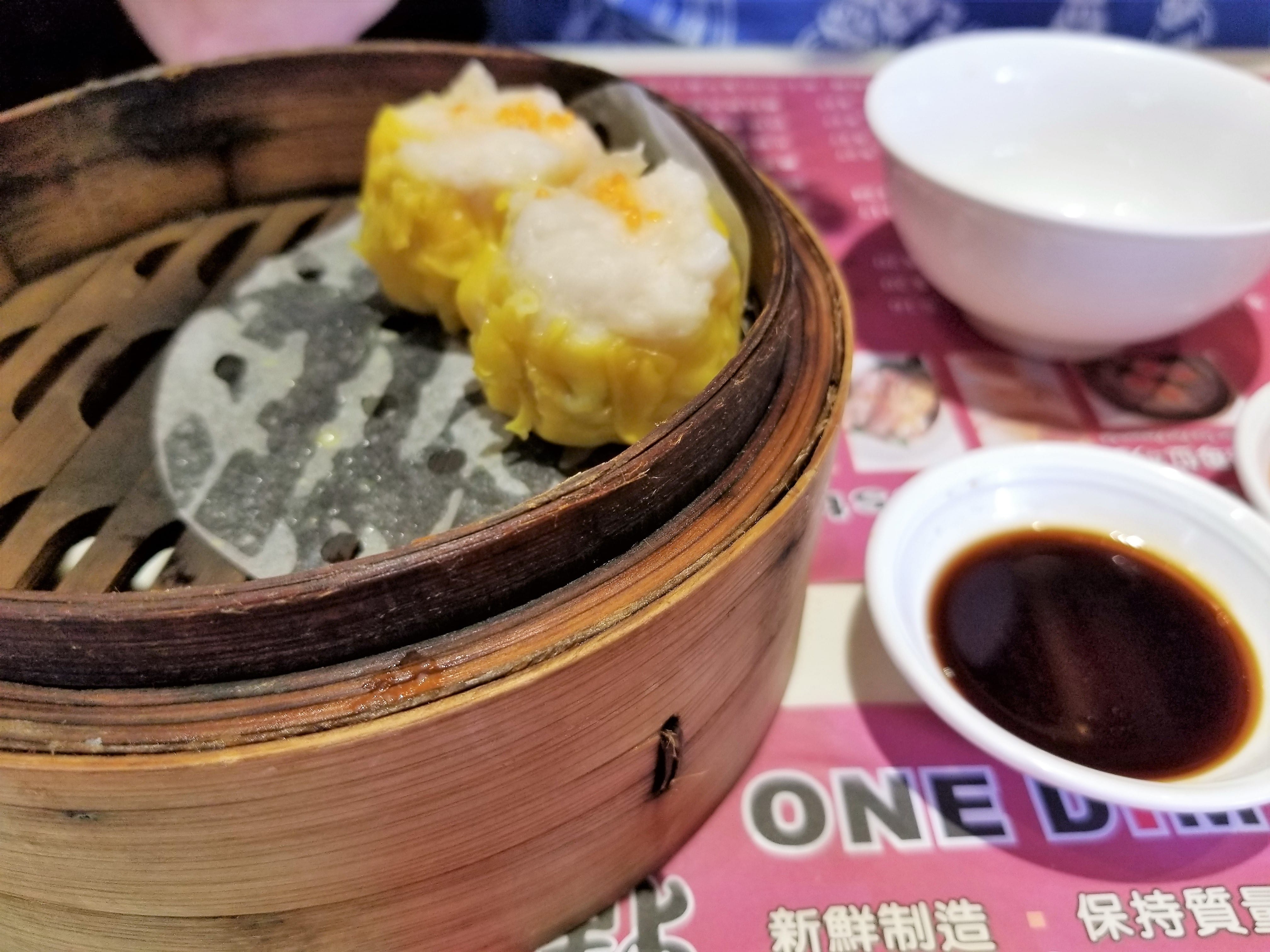 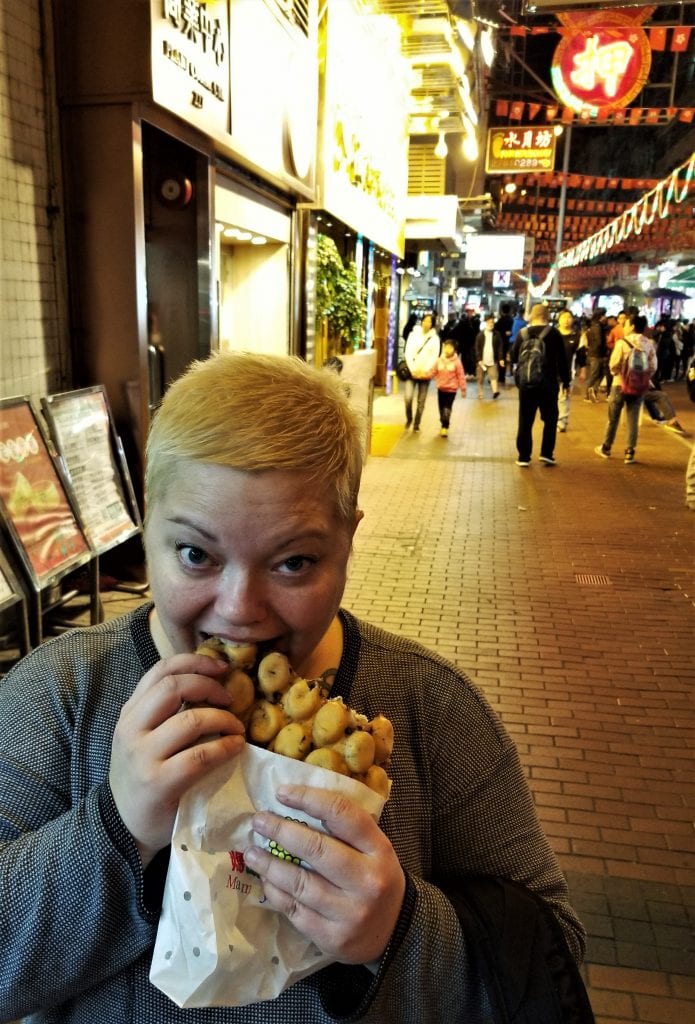 The first thing I had to eat in Hong Kong was ultra-memorable. I wasn’t feeling well, and I’d just gotten off a 17 hour flight. I wanted something comforting. Well. That’s what I got . . . in spades. Mammy Pancake, where have you been all my life?

Mammy Pancake is a Michelin-recommended egg waffle joint with several locations in Hong Kong. Crispy on the outside, chewy and soft in the interior of each segment. Not overly sweet. Pure deliciousness, and everything made fresh. It’s the ultimate street food.

My first eggette was banana chocolate chip-flavored from the Mammy at the end of the Temple Street Night Market. They offer up a million other flavors, though–green tea, red bean, cheese, sesame, pork floss, mocha, chestnut, sweet potato, and on and on. I am now deeply wishing some enterprising person would open up a Mammy Pancake outpost in the Philly area, because on a cold day–and we’ve been in the midst of a bombogenesis tundra lately–this is what I want. Hell, on any day, this is what I want.

I’m told that I can order some frozen egg waffles online (not from Mammy Pancake) and have them delivered, or I can order a special waffle maker and go the DIY route, but it just won’t be the same. Alas.

I also deeply want someone to open a branch of Butao in Philly–because so far the Japanese ramen shops locally pale in comparison to Butao. The shop offers Hakata ramen, and let’s you choose the your spiciness level, the richness of the broth, noodle texture, and toppings. It was–in a word–heavenly. I opted for the Green King, which is Tonkotsu pork broth infused with basil and olive oil, and I added lots of garlic, pork belly, seaweed, a marinated egg, and scallions . . . and then the whole thing is topped with parmesan cheese. I can’t even begin to describe how excellent the bowl of ramen was, but it’s a good indication that there always seems to be a line. We waited for perhaps 15-20 minutes for a table. It almost didn’t happen–Mr. Pretty was feeling particularly crappy that day and didn’t know that he had it in him to stand in line. I would have waited forever.

Speaking of waiting, One Dim Sum also always has a line out front but is worth every second of the waiting. One Dim Sum has one Michelin star and is located on the Kowloon side of Hong Kong. We wandered into line around noon-ish. The process is: (1) get your name on the waiting list; (2) the staff gives you a menu card; (3) mark what you plan to order on the menu card and turn it back in; (4) wait until your number is called. Oh, and while you’re waiting, gaze jealously at the people inside who are eating delicious-looking dim sum. We waited for nearly 40 minutes. 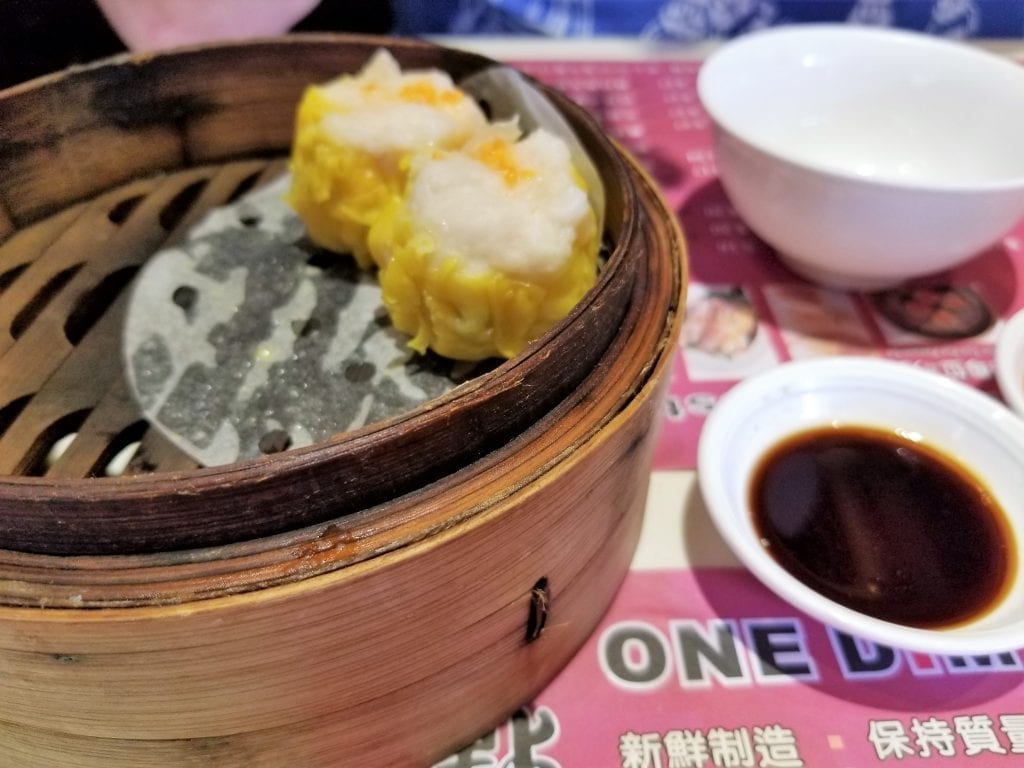 Neither one of us was feeling awesome that day, but we bravely soldiered on. Juicy siu mai, savory char siu bau, and delicate har gao were just about all either of us could eat, but everything was so good. The restaurant is tightly packed, and runs fast–within a few minutes of sitting down, you have tea and your food. Stellar. 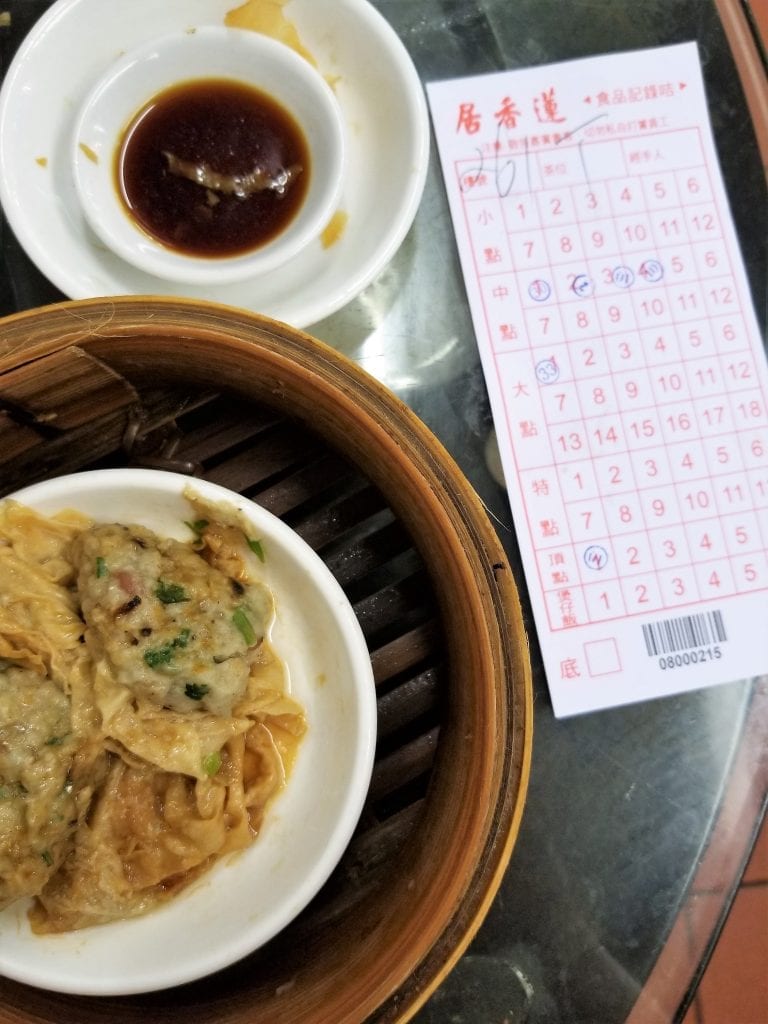 We were also able to have a more traditional dim sum experience at Lin Heung Kui in Sheung Wan. There’s something to be said for being the only Westerners at a joint, where English is not spoken overly much. When you only need to point to a bamboo tray of something delicious that rolling by on a cart, you don’t need to know Cantonese or English.

The dining room was super bare bones, and kind of run-down looking, with fake birds perched in dusty old bamboo cages. The Chinese ladies schlepping the carts around were positively ancient. A very elderly man showed us to our tables and delivered our tea, whereupon he poured some into a large wide bowl and demonstrated how we were supposed to rinse our tea cups and chopsticks in the tea. That ritual finished, the bowl was stashed under the table, and the parade of food began. The cart ladies put a little stamp on your order card for each bamboo steamer you snag, and then at the end you pay at a desk before you go on your merry way, belly full of dim sum.

I won’t lie: the food at Lin Heung Kui wasn’t nearly as great as One Dim Sum, but it was most certainly old school Cantonese. And the food was still very good–bbq pork buns, siu mei, steamed beef balls, cheong fan, shrimp dumplings. So good and a great experience! 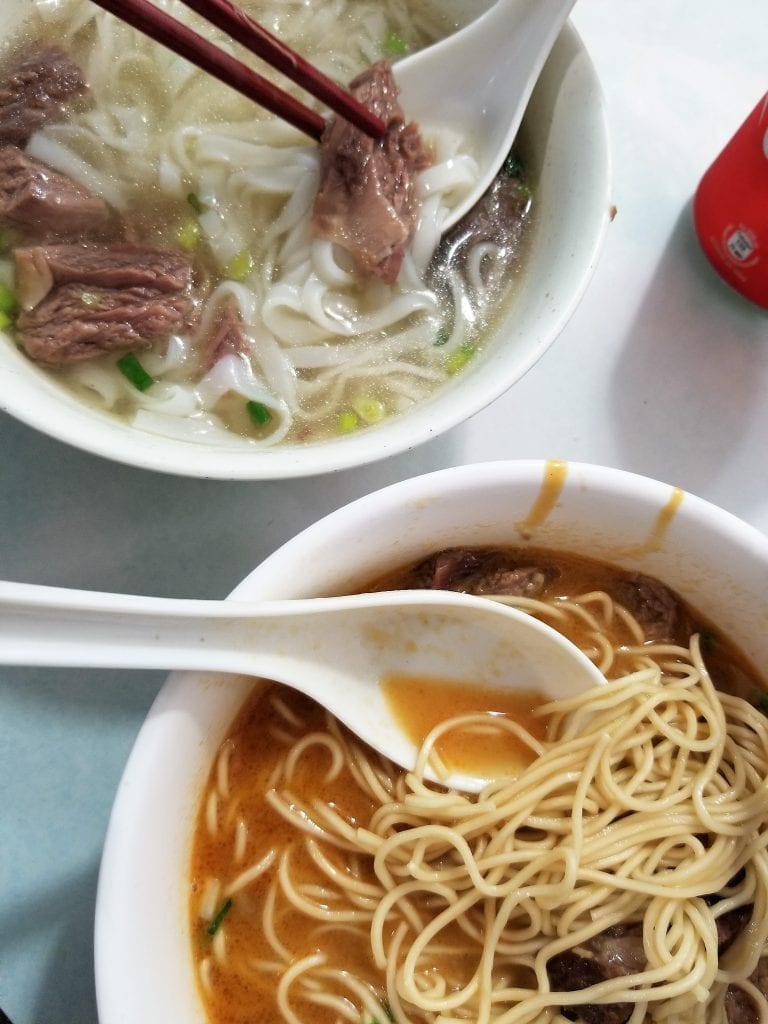 Butao was not the only great soup we had in Hong Kong. Perhaps on the third or fourth day we were in the city, we were wandering around the area near Tin Hau metro station–since both of us were feeling peckish, we chose the Michelin-recommended Sister Wah.

To begin with, Sister Wah is not the easiest place to find. There are strips of clear plastic sheeting over the door, so it looks far more industrial than food-friendly. There are maybe six or eight small tables in the joint. We were lucky enough to grab the last empty table, and the very nice man who seated us chatted us up a bit and made recommendations.

Maybe he could tell I was sick, but he recommended their spicy beef brisket soup. It was exactly what I wanted. The ramen noodles were slightly chewy, and the broth was spicy enough to clear out my sinuses. And the brisket! Holy schmoly–the brisket! It was perfectly tender and delicious.

Mr. Pretty’s bowl was plan beef broth with flat rice noodles. He assures me that it was quite delicious.

There were other meals in Hong Kong, some some pretty darn good, but the places named here are the highlights. Interestingly, the least interesting/most mediocre meals we had were closest to our Airbnb, in the Poho neighborhood. Part of me thinks its because it’s a gentrified hipster area that’s probably an even mix of Chinese and non-Chinese people living there . . . which means Westernized food, to some extent. Man Mo Dim Sum, for instance, offered up a truffled brie dumpling that was very, very wrong. The moral to the story: when in Hong Kong, eat traditionally and look for the places with the longest lines.