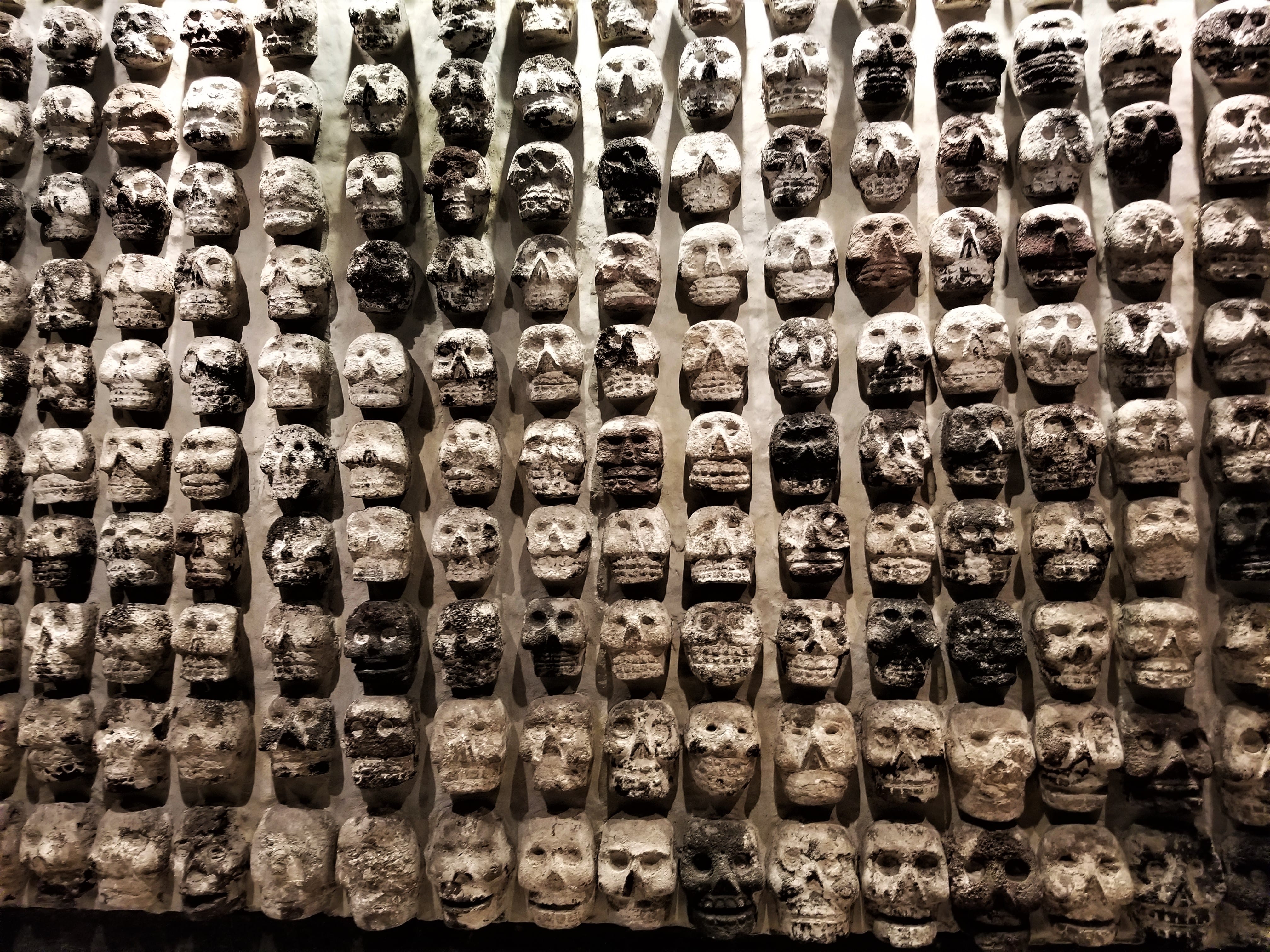 A friend, when I told him I was going to be spending the day in Mexico City, laughed like crazy and said, “You’re going to spend most of your time in cabs!” Yeah, I’d read about the legendary Mexico City traffic, but my Uber ride to Polanco in the morning had been a snap. I was feeling pretty smug.

And then I took an Uber from Polanco over to Templo Mayor in Centro. Whoa. I traveled 6.3 km (nearly four miles), and it took exactly 35 minutes from point A to point B. Most of that time was spent driving about four blocks once we hit the Centro area. My Uber driver was delightful and pointed out things of interest, but I’m not gonna lie: I was sure he was going to sideswipe a car. Or a car was going to sideswipe us. Or we were going to get run over by a bus. Because lanes seem to only be the merest of suggestion to Mexico City drivers. The only rule that drivers appear to follow is stopping at traffic lights. And that might have just been my imagination.

Mexico City drivers are animals, and I say that with the deepest respect and admiration for their offensive driving skills and sheer ballsiness.

Appropriately chastened for thinking I’d somehow circumvented traffic, I climbed out of the Uber on the far side of the Zocolo and nearly kissed the sidewalk. I say nearly because there was no room–the sidewalk was crammed full of people. As it turns out, I’d wandered into the second-to-last day of the Festival of Indigenous Cultures, Peoples, and Original Neighborhoods (aka the Quinta Fiesta de las Culturas Indígenas, Pueblos y Barrios Originarios de la Ciudad de México). It was kind of amazing: more than a thousand food and craft vendors representing 29 Indigenous groups of Mexico. The groups in question, apparently, include Mazatecs, Otomies, Zapotecs, Totonacs, Tepehuas, Chichimecas, Huastecos, Mazahuas, Mixtecos, Purépechas, Triquis, Nahuas, Popolocas, Tzeltales, Tlapanecos, tsotsiles, Huicholes, Mayas and Mixes, and a bunch more. 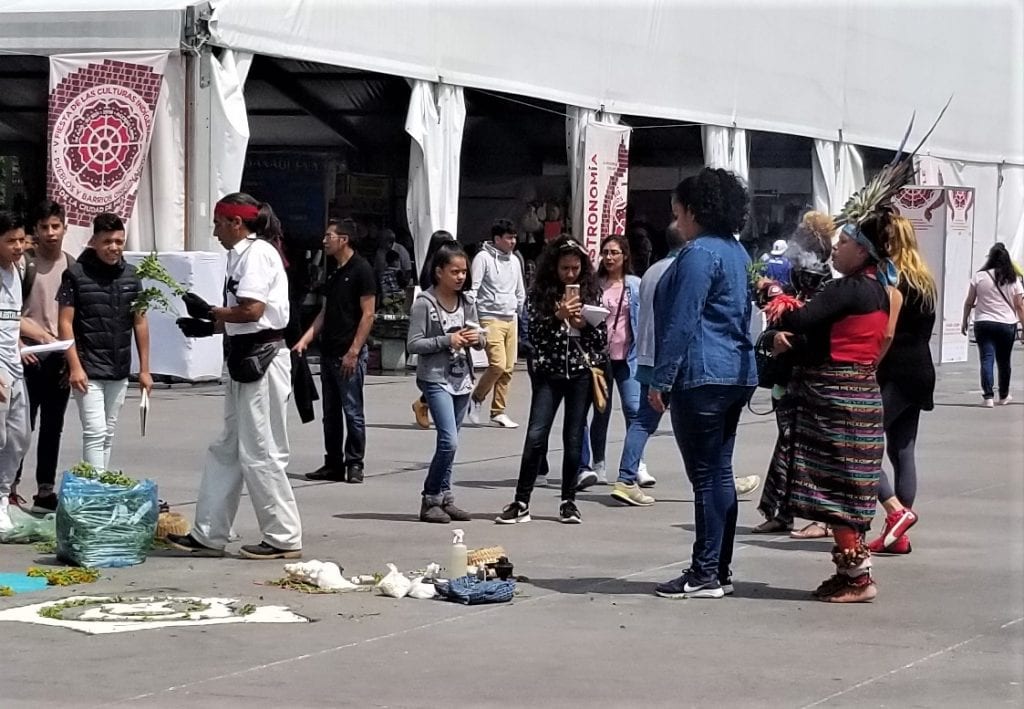 While I can’t be 100 percent sure, I think I ran into several limpias, which are spirit cleansing rituals of one sort or another. It seems like all the people doing the rituals were using some kind of herb. Rue, perhaps?

Farther along, closer to the entrance of Templo Mayor, was a group in massive feathered headdresses doing some kind of performance, led by a guy drumming. After doing a little bit more research, I’m pretty sure it was Aztec dancers, or concheros. There’s a pretty good primer about who concheros are and the significance of the dance here. I wish I had known more about the concheros before I ran into them–I likely would have spent more time watching and making an effort to look at each dancer to see if I could figure out what animal or god they were representing. Below are a couple photos I snapped (click the thumbnail to embiggen)… 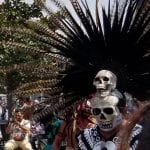 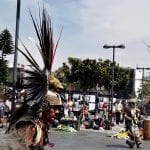 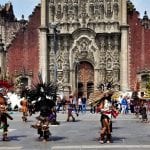 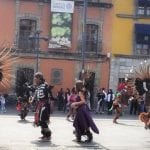 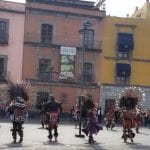 Tearing myself away from the dancers was only possible because actual Aztec ruins lurked just behind them. Templo Mayor (and the entire Historic Center of Mexico City) is on the UNESCO World Heritage List. It was added in 1987. The story of how the ruins were found is pretty interesting. To begin with, the first parts of the temple were built in the early 1300s, and it was expanded over various Aztec rulers’ lifespans through the early 1500s. If you know much about Mexico’s history, you know that Hernán Cortés led an expedition of Spaniards that conquered what was then known as Tenochtitlan. The Aztec emperor at the time–Moctezuma II–was killed, and the Spaniards ordered the destruction of all the Aztec religious relics. The Templo Mayor was, of course, sacked and partially destroyed, and then built over entirely. That’s a really simplified version of what went down, and I highly recommend getting a much more involved history lesson somewhere, because the Aztecs were bad-asses. 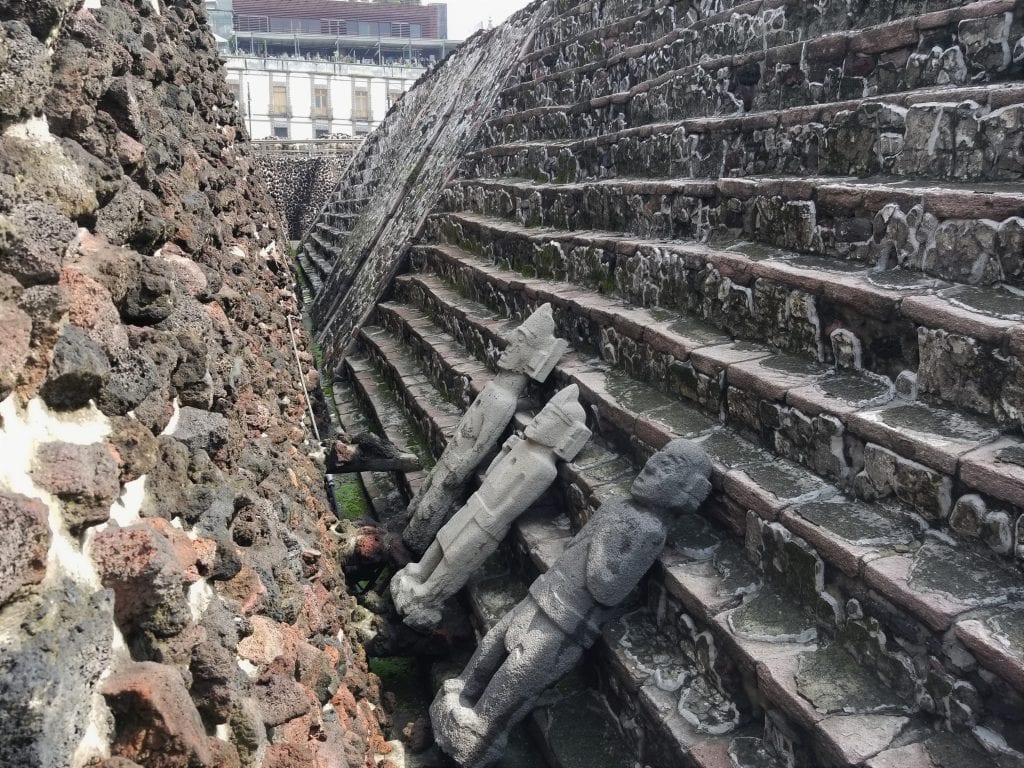 Anyway, fast forward to the 19th Century–scholars had a pretty good idea of where to look for the temple, but excavation was stymied by the fact that the neighborhood was pretty high end. Some word was undertaken, though. That said, it wasn’t until 1978 that excavation was kicked into high gear–all because some public works guys were digging in the area and stumbled onto a pre-Hispanic monolith. The cool thing is that the Mexican government went all in and ordered the destruction of thirteen buildings that had been constructed over top of the site. There’s a museum on-site to house some of the most important finds (more thumbnails; click to embiggen). 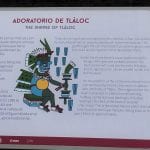 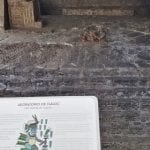 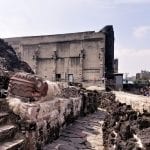 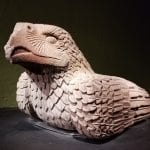 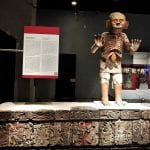 A couple of my favorite things about Templo Mayor include the wall of skulls–outside you can see them in their natural habitat, so to speak, and inside the museum is a more complete wall that was excavated. 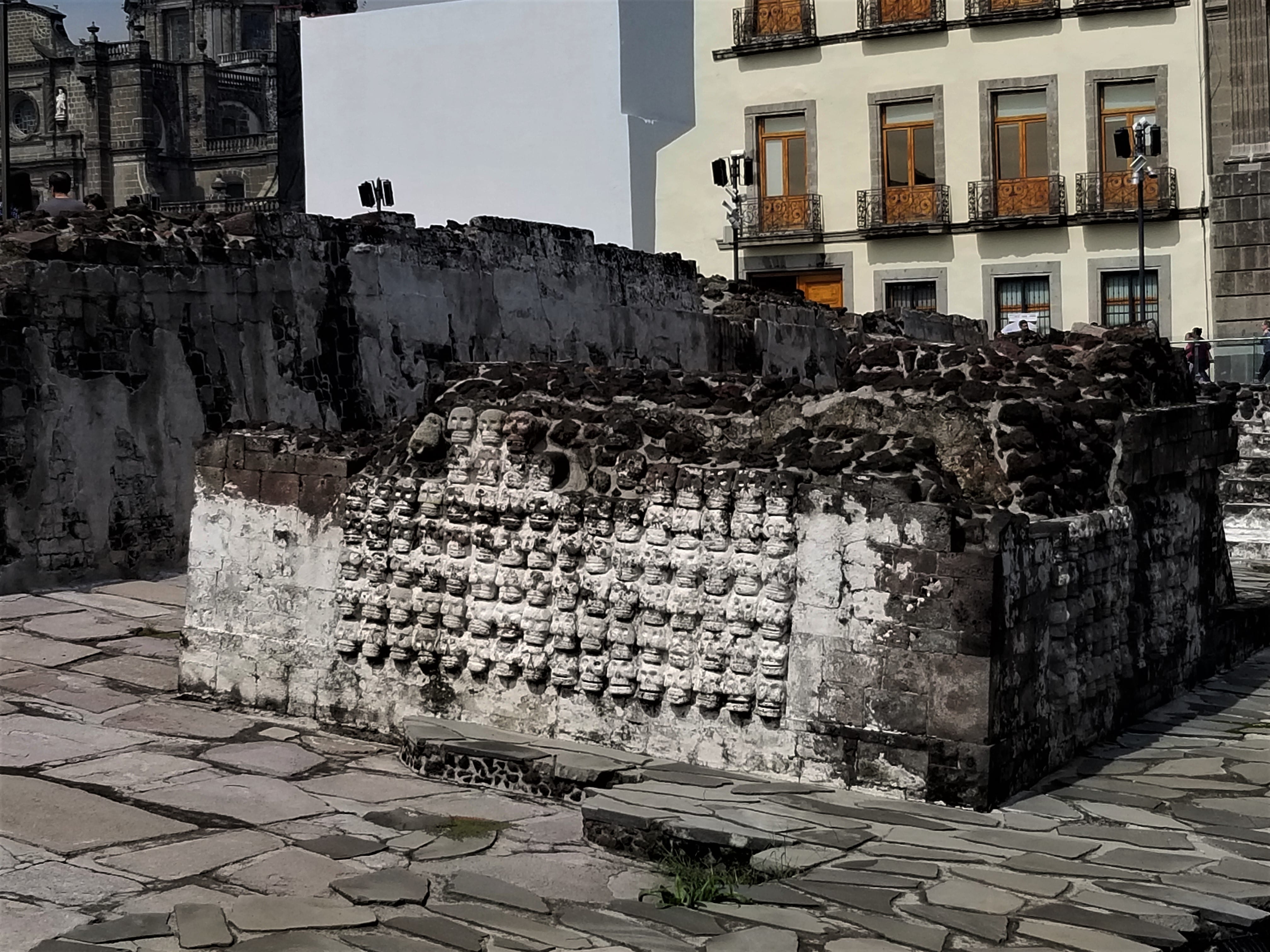 And inside the museum (aside from the preserved wall of skulls) were a few other things of note. More than a few, but that’s a different story. I mean, for starters, excavation and discoveries are still continuing, which is so incredibly cool. The most recent likely aren’t even in the museum yet. But one thing that both amused and freaked me out where these face knives. 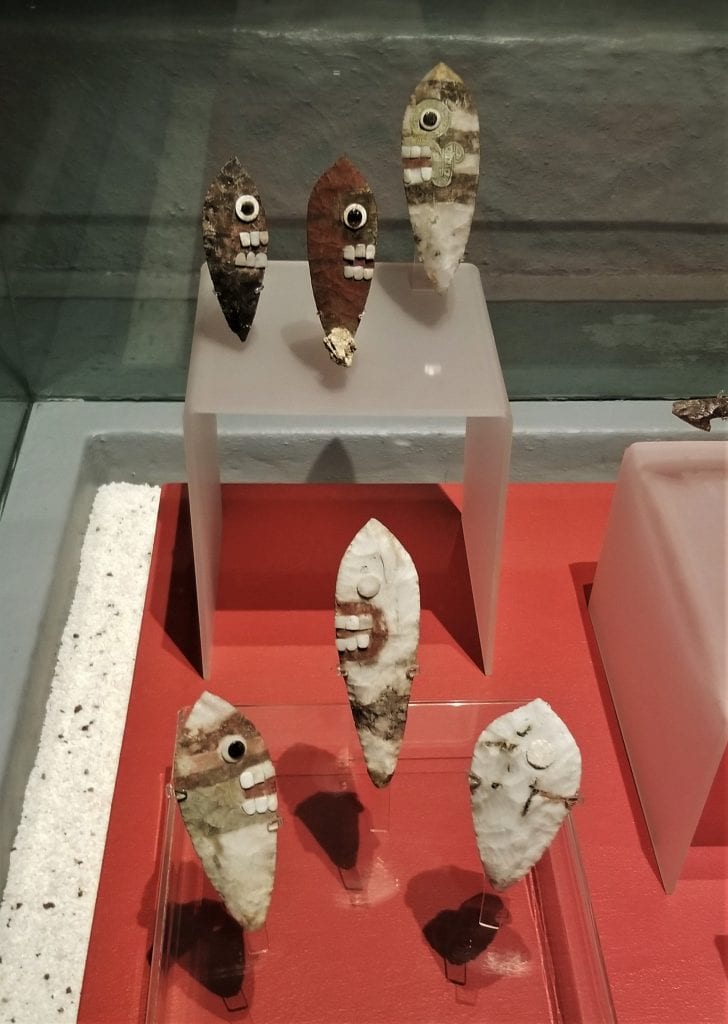 They are tecpatl, a flint or obsidian double-edged knife that were used both as weapons and in human sacrifice rituals. You can read a little more about them here, but it’s the teeth that get me. It’s just so creepy. I mean, sure, I have a thing about teeth anyway, but these are . . . extra creepy. You can bet they will absolutely feature in my nightmares. Tecpatl with teeth, drivers in Centro, and the eerie God of War statue with the open chest. Pleasant dreams.