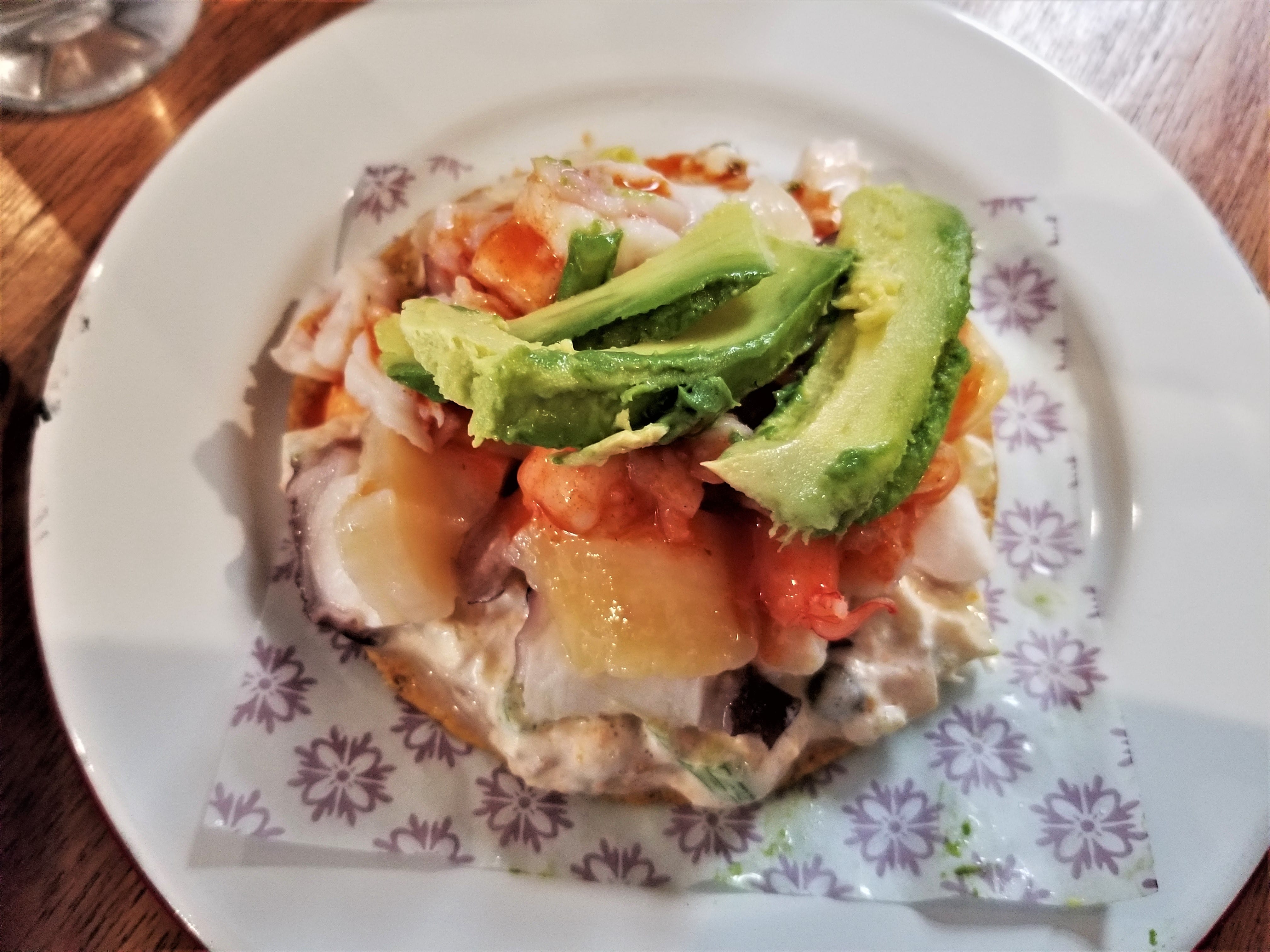 I’m not going to lie: the Centro area of Mexico City is a lot to absorb. There’s so much going on that it’s overwhelming. When I left Templo Mayor, I had one thing in mind–a bit of quiet. Well, that and a light lunch. That’s how I found myself in the Condesa neighborhood. 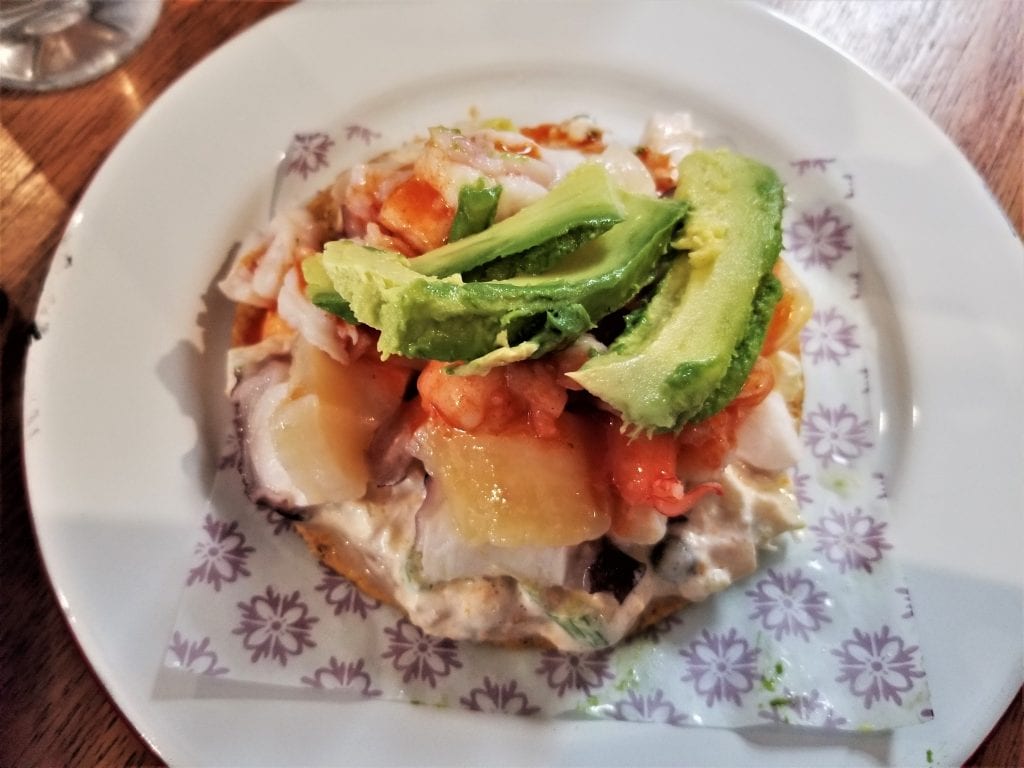 If you have kept up with Anthony Bourdain, you might recognize the name. Bourdain (gone but definitely not forgotten) visited the original La Guerrerense location–in Ensenada, Mexico–back in 2012, and he raved about the tostadas. I’m not a moron: I went there for a tostada. Of course, I was spoiled for choice but ended up ordering a Singapur tostado, which is octopus, shrimp, and scallop ceviche on top of a mayo-y crab salad on top of the most perfect tostada in the world.

Delicious doesn’t quite cover it. I wanted to eat a dozen of them. I wanted to move to Mexico City so I could eat them every day. They are, maybe, the most perfect thing I’ve ever eaten. I have willpower, though, and ate only one . . . although as I sit here typing this, I crave a tostado. I yearn for one.

I was told that the Ensenada location has a menu in Spanish; the Mexico City location does not…so be prepared for that. The restaurant itself is cute, with an open front. The open front style is fairly common–the chocolate shop I stopped at next also had an open front. In fact, Dolcenero is little more than an alcove with a table in the middle and a shelf on the wall. 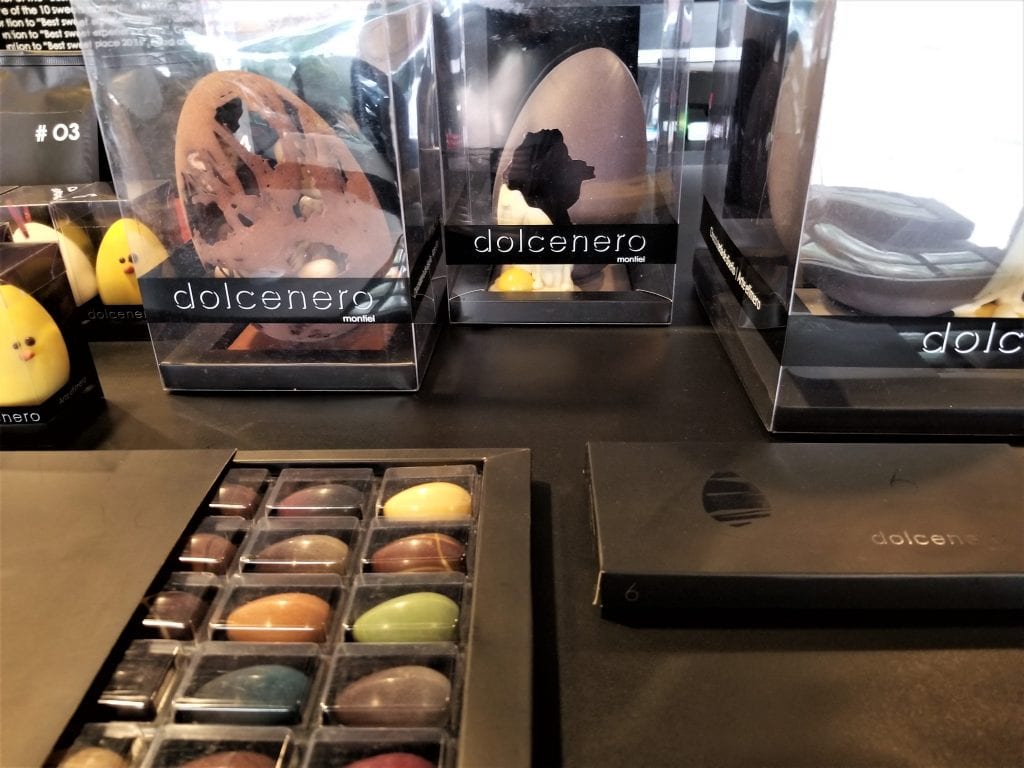 It’s a very pretty table, of course–chocolatier Mau Montiel is makes chocolates that are inspired by Dalí and Miró. It’s all very chic and minimalist. I picked up a small container of chocolate covered pepitas (the chocolate was more icing sugar than actual chocolate and very sweet) and a small box of truffles.

Like a good girl, I took these home to the States so Mr. Pretty could try them out. I will tell you now that two of these–the corn truffle and the grasshopper truffle–are not the greatest chocolate I’ve ever eaten. They were sort of . . . gritty. We tried the corn truffle first, and I reasoned, well, okay, maybe it’s supposed to be something like corn meal. But then we tried the grasshopper truffle. I had no beef with the flavor, but the texture grossed me out a bit.

That was the end of it for Mr. Pretty. He refused to try anymore chocolate from Dolcenero. I took over the taste alone. As it turns out, the corn and grasshopper truffles were the only ones with that texture. Here’s the run-down:

Dolcenero was not the only place I stopped at in Condesa for chocolate. I also made a pit stop at Tout. If Dolcenero and Sucr’elle represent higher end chocolate, Tout is a bit more approachable. That’s not to say that their chocolate is any less amazing. Because let me tell you–it’s fantastic. Their passionfruit-filled chocolates are to die for. Seriously. They sell a larger variety than the other two places I visited as well: truffles, bonbons, chocolate covered marshmallows, chocolate covered fruits, hot chocolate, bars, etc. 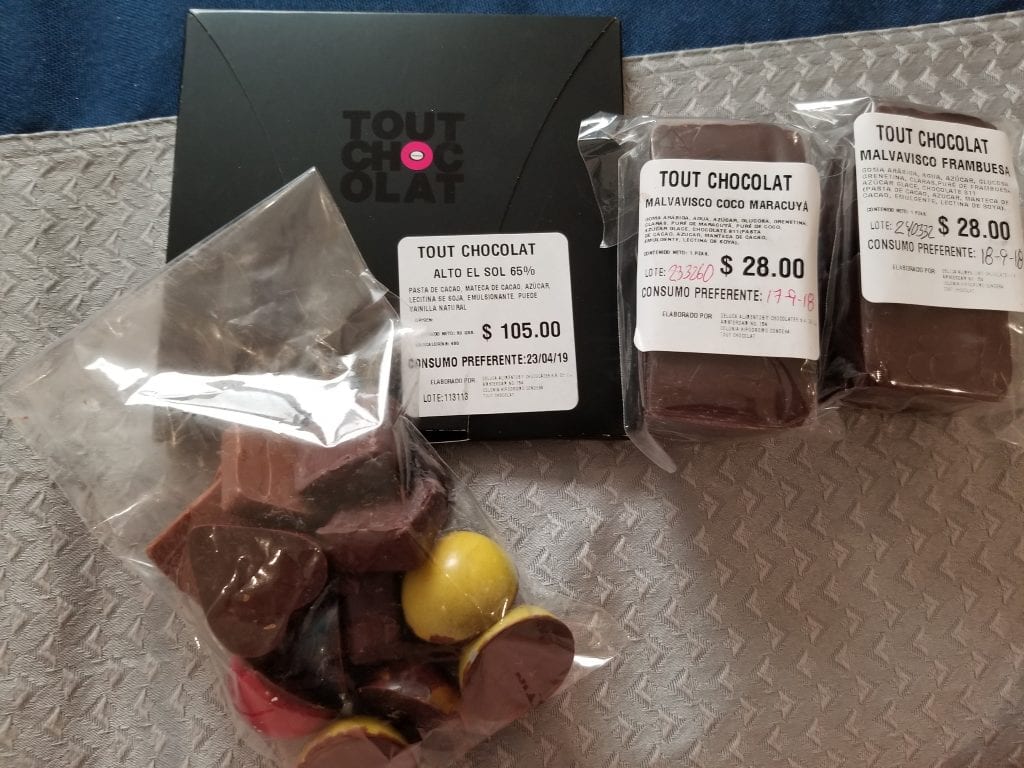 While admittedly I was in Condesa primarily for the food, I did find the quiet I was looking for too. Condesa is feels a bit like Polanco, but with fewer rich people. Sort of. I guess it feels like it’s more for normal people. I mentioned in another post on Mexico City that there are a lot of really great parks all over the place, and Condesa was no exception. I’m not really sure what park this is, but as I was walking back toward Roma Norte it sprang up. I sat for a while to watch what people were doing. There were kids skateboarding, dads playing soccer (sorry, futbol) with their kids or alone, a ton of people having dog social hour. Everyone was really relaxed and having a good time. It was a really nice afternoon, too. Not to hot, not chilly. It was a pleasant way to spend 30 minutes, relaxing. All the better to prepare for my last few hours in Mexico City! 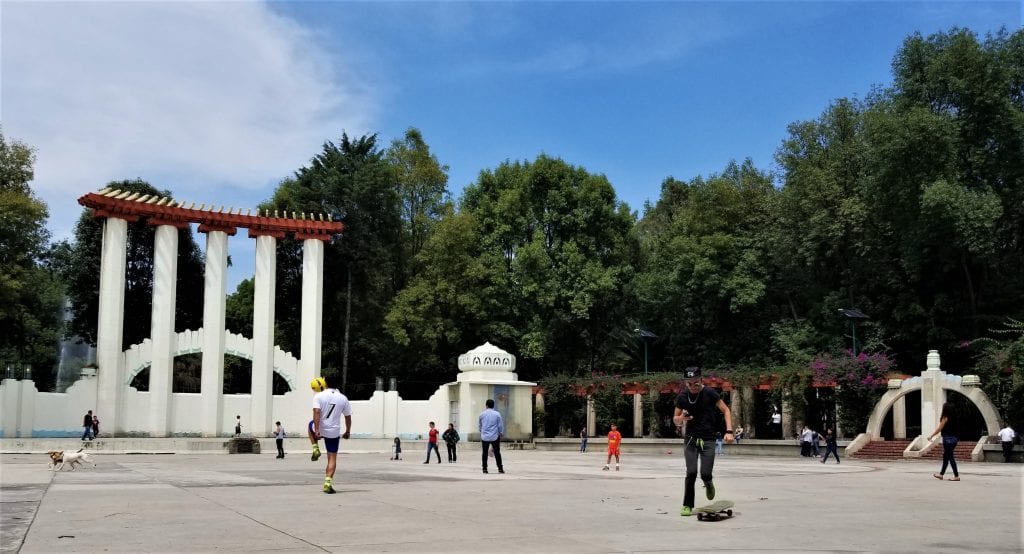