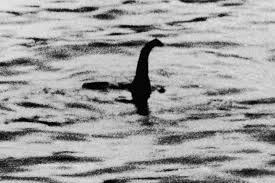 In my head, visiting Loch Ness would go something like this:

It’s a fall day, with trees turning orange and red, and I’m wearing a long, flowing cloak in the tartan of the McFie clan (my claim to some way-back Scottish heritage). The sky is dark and cloudy, with that famed Scottish mist clinging to the banks of the Loch. I stand alone, hands shoved in the pockets of my cloak, gazing out across the choppy water–when suddenly there is a quiet splash and quiet lowing, and there, not fifty yards away, a long slender neck breaks the surface. It’s Nessie. She looks at me. I look back. And then she silently disappears back into the loch.

That’s not what happened.

Hey, you can’t blame a girl for dreaming.

The first thing you see when you arrive at Loch Ness is Urquhart Castle, a 13th century structure which is allegedly where the most sightings of the Loch Ness Monster have occurred.1 Urquhart Castle has a fairly fascinating history, which is partially covered in a short film that you can view at the visitors’ center. I say “partially,” because–well, the film is narrated in an English voice, and it’s fairly sympathetic to the government forces that felt the need to blow up the castle to keep it from falling into the hands of Jacobites during the uprising in the late 1600s. This may be a case of the winners getting to write history, but I did wonder how the film narration might change if Scotland ever votes to leave the UK.

I will say that it was at the castle that my dream of what visiting Loch Ness might be like came the closest–it wasn’t terribly crowded, and it cleared out when the clouds rolled in, and it started to rain pretty steadily. And so there was, almost alone, looking for Nessie in the rain.

It really was a dream come true . . . even without the cloak and the appearance of Nessie.

In the photo to the right, I’m standing in the remains of Grant Tower, which has a very narrow, claustrophobia spiral staircase leading up to this landing all the way at the top of the castle. By the way, the earliest Nessie sighting dates to the 6th century, when Pictish legend describes a man being killed by a sea monster.

Anyway, I mentioned the interesting history of the castle, but it goes back further than the 13th century–excavations have indicated that settlements in this area go back to as early as 2000BC, and a fort may have existed at the location of the present castle as far back on the 7th or 8th century.

After Mr. Pretty and I checked out all the nooks and crannies of the castle, we headed down to the shoreline because if you’re at Loch Ness, you have to touch the water, right? If Nessie does, indeed, exist, now we can both say that we’ve touched water that Nessie touched. Or peed in, as Mr. Pretty likes to say.

There are several ferries that take folks up and down the loch, and Mr. Pretty and I managed to get perfect seats at the back–an ideal vantage point from which to search a little more for any glimpse of the monster.

Again, no monster–but it was a gorgeous ride. Plus, there’s something about knocking an item off your bucket list!

1. Coincidentally, the castle also used to be available for weddings, but there are so many tourists descending on the castle (it’s the third most visited site in Scotland) that Historic Environment Scotland ruled earlier this year that weddings would no longer be allowed. That seems patently unfair–the castle belongs to the people of Scotland, not tourists. There should be an effort made to allow for both activities, even if that means limiting the number of tourists who can visit each day.↩