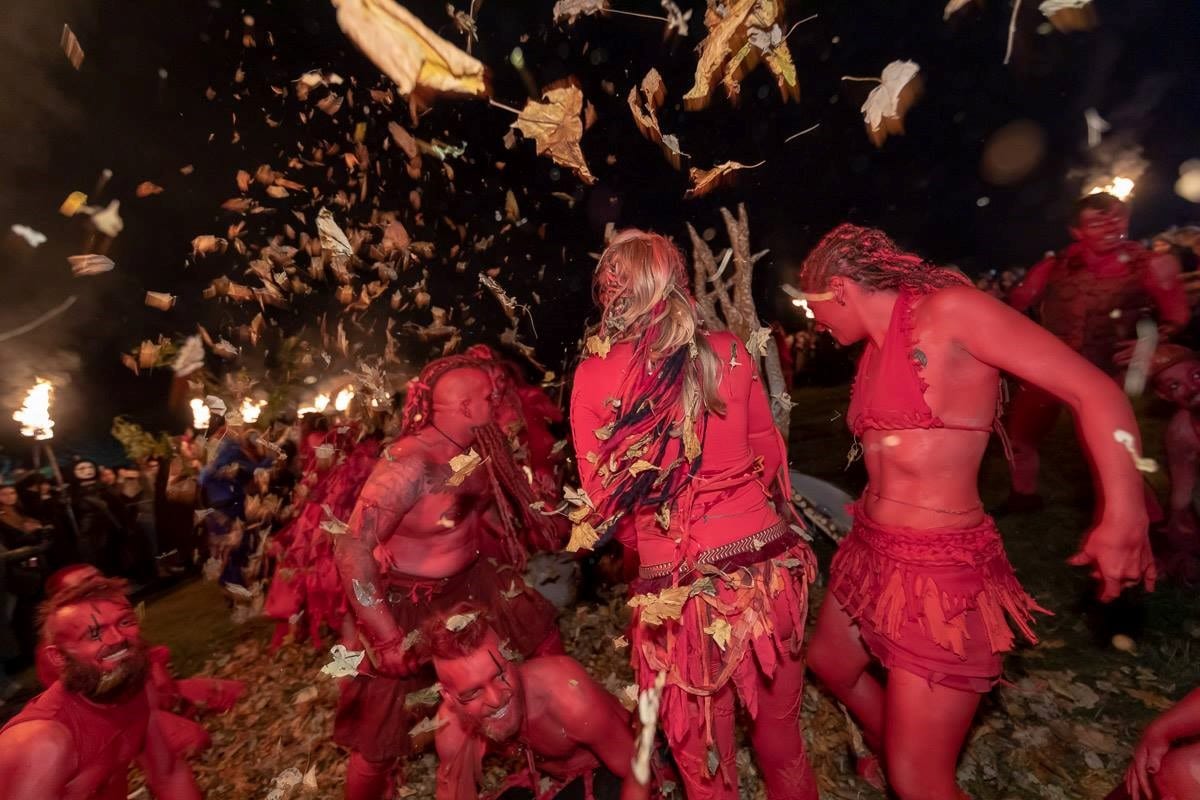 Fire festivals combine all of my favorite things: pagan rituals, wild dancing, Celtic drama, and fire. There are quite a few in Scotland, and so there was another reason I really wanted to be in Edinburgh for Halloween this year: the Samhuinn Fire Festival.

Typically, the Samhuinn Fire Festival is more like a parade on the Royal Mile. I chose the apartment we stayed in specifically because it was a block off the Royal Mile and would be convenient to view the parade. You see where this is going, right? Because it’s drawn massive crowds in the past, the festival was moved to Calton Hill (just like the Beltane Fire Festival).

Okay, let’s be real: it doesn’t really matter. Edinburgh is fairly small, and getting from our apartment to Calton Hill was an easy cab ride. No big deal. It still irritated me–at least for a minute. And then I got freaked out because the Calton Hill event was ticketed. I nearly had a heart attack, thinking I would miss my chance to buy tickets. As it turns out, I was right to worry. While I did buy tickets immediately, there was a note on the Fire Festival website that assured folks that while tickets were sold out, there would be tickets available for sale at the gate the night of the festival. That turned out NOT to be true, and people were pissed.

I’m getting ahead of myself, though. First, let me relay the reason for the festival:

The story follows the overthrowing of Summer by Winter, with a dramatic stand-off between the Summer and Winter Kings. This is overseen by the Cailleach, a Celtic representation of the Goddess, or Divine Hag, who ultimately decides each King’s fate and ushers in the colder months.

The transformation from Summer to Winter is supported by the energies and interactions of the Summer and Winter courts through performance, music and dance. The narrative focuses on this conflict and its resolution, but also focuses on the transition that many aspects of life take during the changing of the seasons.

Plus, you know, fire.

So Halloween night rolls around, and I’m completely excited for the festival. Mr. Pretty and I bundle up and head for Calton Hill. It’s dark. I have zero idea where I’m going. We wait in lines. We follow people up a long winding paved road. It’s still really dark. We get to the top of the hill and there’s nothing happening. Lots of people are milling around, and there are a few vendors selling food and drinks. It’s really dark. And it’s windy. I mean, we’re on top of a big ass hill. It’s cold, and I’m glad I remembered to wear gloves and a knit hat.

And then the drumming started.

It’s hard to make sense of the next few hours. I know that Summer is going about its business, still partying since their reign began at Beltane, so when they get to the south side of Calton, it’s with serious exuberance. The whole story is right here, but know that Summer is represented by folks painted red. And there’s a symbolic rabbit. And while the Summer folks are reveling, Winter forces are rising on the North side of the hill (story here). There are battles and all sorts of shenanigans. It’s basically one big cosplay. And because this is the first year the Samhuinn Fire Festival was on Calton, they decided to make it a giant free-for-all experience. The organizers called it “immersive,” but because there were eight million things happening simultaneously, it made the experience feel fragmented and random.

It didn’t really matter, though. I may not have understood exactly what was going on, but it was still fun and weird and vaguely mystical.