Chances are, if you’re visiting Venice, you’re a day-tripper from a cruise ship. The city receives 24 million visitors annually–and 15 million of those tourists are cruise ship refugees. But for those of us who plan to spend a few days or more, some decisions need to be made–chief amongst them is where to stay. There are six main sestieri, plus a bunch of surrounding islands. 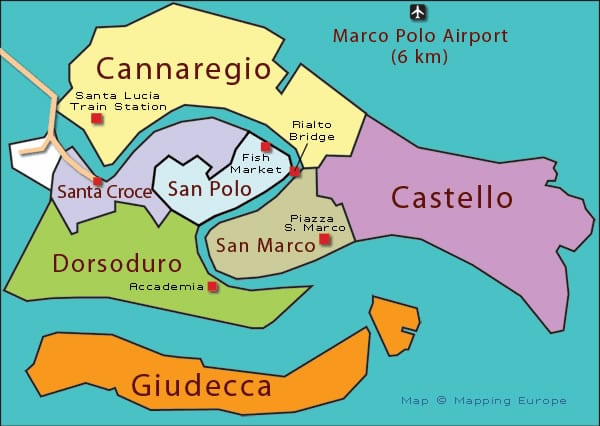 The vast majority of people stay in the San Marco sestieri. Maybe they figure that’s where all the big tourist draws are. And yeah, okay, but it’s the last place I want to stay. Because public transit is so great in Venice, it makes more sense to look for lodging elsewhere, away from the crowds/hordes. I’ve stayed just off the Sant’Elena and Giardini vaporetto stops down at the tip of the Castello sestieri during my last two trips to Venice, but I can see staying on the Lido or on Giudecca, Murano or Burano, etc. Or off a vaporetto stop that isn’t on the Grand Canal side at all.

Let’s start with how you plan to leave Venice’s Marco Polo airport. I tend to take the Alilaguna waterbus, the first stop of which (if you take the blue line) is Murano, followed by Fondamente Nove, Ospedale, and Bacini on the outside edge of Venice, then Certosa Island, and the Lido before heading up to a few stops on the Grand Canal side. Both the red and blue lines end up eventually hitting Giudecca as well. From Murano and the Lido, you can easily catch the vaporetto to a dozen or more Venice stops–but you can also get to the islands of Mazzorbo, Torcello, Burano, and Cavallino-Treporti. That opens up a ton of options, whether you prefer a hotel, a hostel, or an Airbnb.

Admittedly, the waterbus can take some time–it’s a slow mover, taking around 90 minutes to go from the airport to the San Marco stop, for instance. There are, I hear, options to take a train and bus into Venice from the airport, which may or may not be faster. A water taxi would definitely be faster, but it’s also the most expensive option.

My point here is don’t be afraid to stay off the beaten path a bit. Staying in San Marco isn’t going to somehow make your stay in Venice better–unless you like being surrounded by less than stellar food and a lot of crowds.