The Cabin Behind the Saloon: A Cautionary Tale

“I’m here to check-in for the cabin.” I stand at the bar in a dim, run-down saloon a few yards off the Seward Highway, just outside of Anchorage, eyeing the bartender–a redhead in a Circle Jerks tshirt and sewing machine bobbin earrings.

“Okay, it’s right out back,” she says in her gruff voice. “It’s the center cabin–the others are owned by local folks. Permanent residences, I mean. You can park right next to your cabin. There’s no key or anything. Just walk right in.”

“What happens if we want to leave?”

Thus begins one of the strangest hotel stays I’ve ever experienced. When I was planning our trip to Alaska, I looked for a halfway point between Homer and Anchorage for a one night stay. That ended up not being a real possibility–most of the hotels/motels on the Kenai Peninsula and adjacent to Sterling Highway are seasonal fishing holes. closed by the time we arrived in mid September. So I compromised and booked a well-rated cabin near Girdwood. Not even remotely a halfway point, but not all the way back in Anchorage yet either.

But back to this no lock thing.

“There’s a chain lock on the inside of the door,” the bartender said. “But if you leave the cabin to go to dinner or something, it’s no big deal. We’ve never had an incident. Your stuff will be secure.” 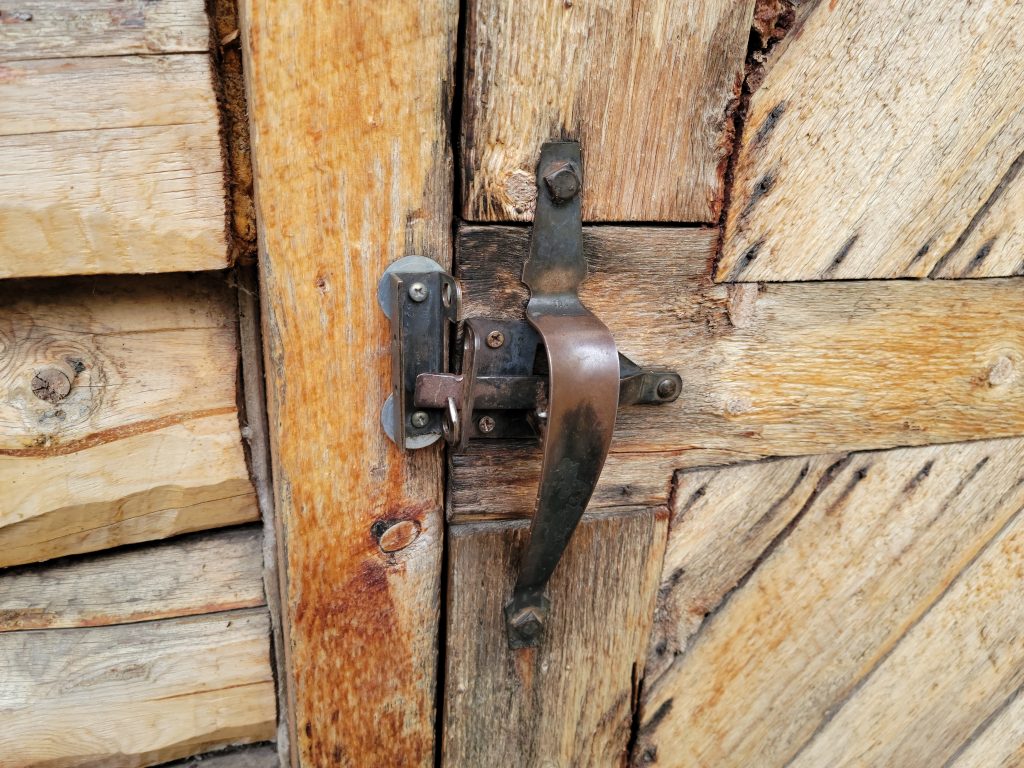 Meanwhile, three gigantic dudes in beards and plaid are low-key staring at me from the pool table. And did I mention that even though the cabin is mere yards from the highway, it backs up to a thick wooded area on a mountain? We’re talking Alaska Deliverance here.

As we’re walking back to the cabin, I half expect to hear the sound of banjos wafting from the trees.

Mr. Pretty moves the car to the cabin, bumping over enormous, water-logged potholes dug into the half gravel-half dirt driveway. He has to swerve to avoid one neighbor’s vast collection of auto parts and torn-up car carcasses. Were the people who rated this cabin so well cooking meth in it? Or is the inside so luxurious and wonderful that it’s possible to forget everything else? I climb up the steps onto the small wooden porch. There’s rickety metal end table positioned next to a rusty chair at the door. And sure enough, no lock–only a levered handle to keep us secure.

I whip open the door. It’s just a cabin. With two cans of bear spray on the shelf just inside the door. That’s . . . not comforting. Oh, and look at that: a massive bear skin hanging just under the window above the front door. Is this a sign that we should expect to be visited by bears and that we’ll be forced to fight to the death? Or is the bear spray to defend ourselves against murderous intruders?

Mr. Pretty closes the door and slides the very flimsy chain lock into place. He glances at me, then the cabin. “This is not good.”

He walks upstairs to the loft, populated with a full-sized bed, two nightstands, and a rocking chair. He flicks on the light. “Uh, there’s a red light bulb in the overhead fixture,” he calls. “I can’t decide if this is supposed to be sexy or scary. I’m leaning toward scary. The light makes everything look bloody.”

And that’s when I discover the hole in the bathroom floor. Well, that’s not entirely true: I discover the board that has been lain over the hole in the bathroom floor. It’s been a long ride. I’ve had a coffee and a lot of water. There’s a square board just in front of the toilet, and it’s not secured. Standing on top of it is like riding a balance board, which makes using the facilities super entertaining. And hey, look at that–part of the sink cabinet is missing, so I get an excellent view of the dirty plumbing while on the toilet. Awesome.

I wash my hands and accidentally stub my toe on the random board, which shifts it to the side–revealing The Hole. I could have dangled my feet into it if I were still sitting down.

I can’t decide if the The Hole is the result of a rambunctious guest, poor maintenance, or intentional–like maybe it’s an escape hatch in case of bear attack or murderous intruders.

Look, obviously we survived, right? No one tried to break in. There were no creepy animal noises circling the cabin all the night. Aside from a terribly uncomfortable bed, nothing all that disturbing happened.

Well, except for the rocking chair that appeared to rock by itself. But that’s a story for another day.

An Alaskan Lack of Imagination