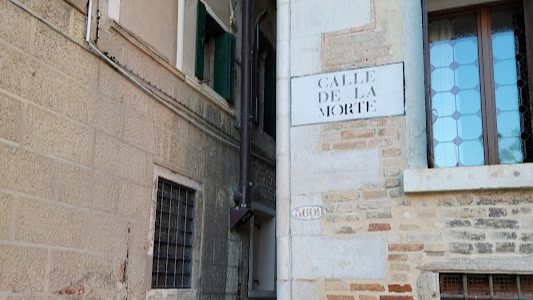 The Alley of Death 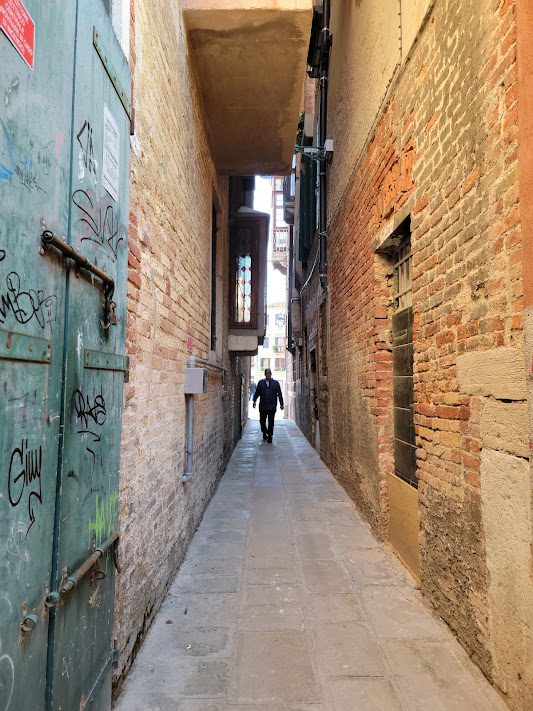 Calle de la Morte in Venice is a mystery. Mr. Pretty and I had a spare hour before the art biennale opened one day, so we visited the narrow alley in the bright light of day. The story I’d heard before visiting was pretty straight-forward: the Council of Ten, which ruled Venice quite ruthlessly from 1310 to 1797, used to lure troublemakers into the alley at night for the purposes of assassination.

Later that night, Mr. Pretty and I joined a tour guide for two hours of ghosts and ghouls stories. It was late–nine at night, the purple twilight fading darker by the minute. Much of Venice may be overcrowded by day, but at night it’s fairly deserted. The day trippers are safely back on their cruise ships. The tourists are back in their hotels or AirBNBs, groaning about their aching feet. The aging population is at home, relaxing. So Venice after dark can feel kind of creepy–all those winding streets, some of which dead-end either to stone walls or small canals.

I didn’t recognize the space with the shadows casting long across the stones, but we found ourselves back at the Calle de la Morte during our tour–only this time the story went slightly different. Oh, it featured the Council of Ten, all right. The difference is that our guide focused on a single victim…and a vengeful ghost.

Venice is old. The construction of the city began in the fifth century. Given the city’s role in world trade and politics–and the age of the city–it stands to reason that people have died terribly on every square foot of Venice. It wouldn’t surprise me to find a haunting on each of the 118 islands that make up the whole. It also wouldn’t surprise me to find out that the story our guide told that night isn’t entirely factual. Still, it’s a good story–and given the increase in street attacks in the U.S., very of-the-moment in its own weird way.

That story involves the bystander effect, or where the presence of others discourages an individual from intervening in an emergency situation–such as an assault. In this case, assassins emerged from the alley, and for the purposes of self-preservation, a group of Venetians pretended they didn’t see a thing. Well, except for one woman, who made the mistake of making eye contact with an assassin. They dragged her back into the alley and into a room to torture her. I’ll skip the details of the torture, but the gist is that her friends peeped through small knotholes in the door, and the woman begged them to save her, all to no avail.

And now there appears to be a really angry ghost who shakes that green door at the forefront of the photo–and if you peek through a crack or a hole in the door, her ghost can attach to you, follow you home, and terrible things await. When you least expect it, the angry ghost shakes the door to inspire you to take a look. Leashed dogs whine and shy away from the door.